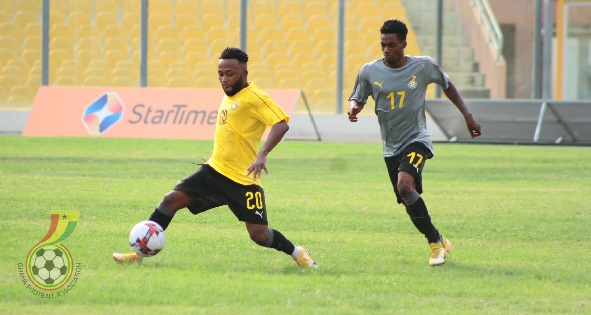 Black Stars coach, Charles Kwablan Akonnor, says he will not hesitate to make some additions to the team when the need arises to replace anyone in the squad.

Coach Akonnor said he was happy with his current team but would not rule out replacing or adding new players to the squad currently in camp before naming the final team to engage South Africa, and Sao Tome and Principe for Ghana's final two 2021 Africa Cup of Nations qualifiers next month.

The national trainer opened residential camping on Monday in Accra with 26 home-based players preparing for the upcoming Group C double-header qualifiers. After training on Thursday morning at the Accra stadium, the players were released to their clubs ahead of this weekend’s Ghana Premier League  and Division One League encounters and are expected back in camp on February 25.

Akonnor told the Daily Graphic after Thursday's training session that he was uncertain about the arrival in camp of his foreign-based contingent for the two important matches.

He explained that he would be glad to have some players abroad joining their counterparts in order to have a full complement of the team ahead of their games.

“I am happy with what I have seen so far and I am looking forward to welcome them back on Thursday after their club football matches.

Ghana top Group C log are but tied on points with second-placed South Africa and need just a win in those two games for automatic qualification to the continent’s flagship tournament in Cameroun next year.

The coach believes the public has bought into his decision to build a standing team with home-based players due to uncertainties over the release of some key foreign-based players due to travel restrictions in some European countries occasioned by the COVID-19 pandemic.

In a rather surprise move, Akonnor invited three players from the Division One League -- Evans Etti (Accra Lions FC), Andy Kumi Francis (Unistar Academy) and Welbeck Takyi (Tano Bofoakwa) -- to ensure a semblance of fairness in the representation of local players in the senior national team.

“I think we have to be fair in giving opportunities to deserving players. I don’t think concentrating on only Premier League players would be enough and I must admit that I have been impressed with them,” Coach Akonnor explained.