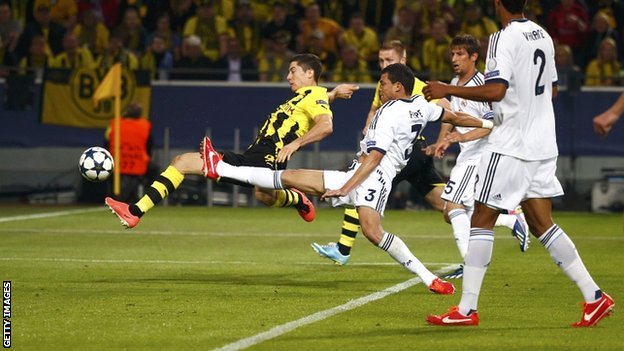 The Polish striker volleyed in Mario Gotze's cross at the back post early on before Cristiano Ronaldo tapped in.

Lewandowski collected Marco Reus's shot to poke in past Diego Lopez and crashed home a 12-yard strike for a hat-trick.

The 24-year-old converted his fourth from the spot, after Reus was fouled.

The forward has been a reported summer target for Manchester United and Bayern Munich, and following this display his value will increase no end after he became the first player to score four times in a Champions League semi-final.

His ruthless display of finishing continued Dortmund's 100% European home record this season and leaves Real Madrid with a mountainous task to reach the final at Wembley in May.

It also showed more evidence of a shift towards German dominance of Europe, just 24 hours after Bayern beat Barcelona 4-0 in the other semi-final first leg.