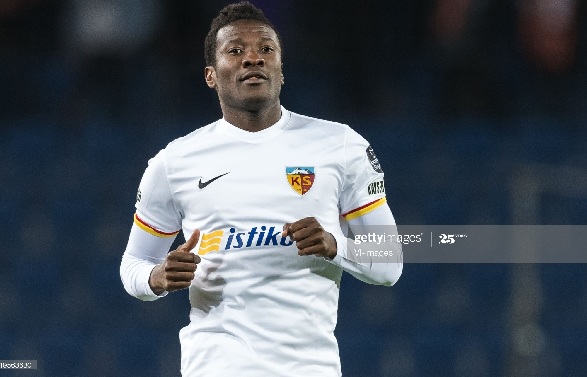 Former Black Stars skipper Asamoah Gyan will not resist an offer to play for Kumasi Asante Kotoko once it is enticing, his manager has revealed.

The player has been linked with several local clubs, including the Porcupine Warriors, who want to bolster their side ahead of their domestic campaign in the upcoming CAF Champions League.

Gyan’s local manager, Samuel Anim Addo, told the Graphic Sports last Friday that even though Kotoko had not make any official approach for Gyan, the football star won’t hesitate to join the club once the offer was good.

The 34-year-old attacker became a free agent following the termination of his contract by Indian side NorthEast United last January after his season was disrupted by injuries. The forward scored just four goals in eight appearances.

In recent times, the player has been linked with some local clubs, especially the Porcupine Warriors, after he once expressed interest to end his career with the Ghana giants.

“Kotoko have said they like him because he once stated that he’ll one day play for Kotoko, but for now no club has approached him with any offer,” Mr Anim Addo said.

He stated that Gyan would not hesitate to sign for any local club once the terms were good, adding that the player was considering offers from Europe and Asia but would only join a club that was able to meet his terms.

“Gyan has had offers from Europe and Asia but if Kotoko can meet our terms, then why not?” he said in response to the question on whether or not the player would accept to play for Kotoko.

Coach Maxwell Konadu said last week that his side needed to sign eight top players to help bolster their squad in order to be competitive in their domestic and continental assignments, but it was unclear if the gaffer would consider the 34-year-old forward in his plans.

Mr Anim Addo also indicated that no local club had formally made an approach to sign Gyan despite reports linking the prolific scorer with a return to local football, 17 years after he left Liberty Professionals as a teenager for a professional career in Europe.

If he agrees to join Kotoko, he will be following in the footsteps of his elder brother, Baffour, who also featured for the Porcupine Warriors in the 2010/11 season in the twilight of his career.