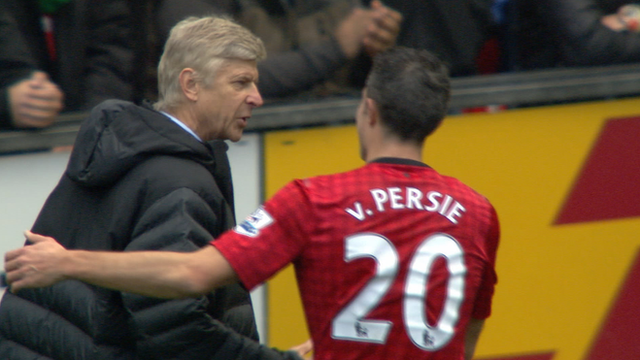 Arsenal manager Arsene Wenger says his team will hold a guard of honour for Manchester United's players before Sunday's match at Emirates Stadium.

The match is the first United have played since sealing their 20th league title with a 3-0 victory over Aston Villa at Old Trafford on Monday.

Wenger said: "I want the traditions of English football to be respected."

United boss Sir Alex Ferguson added: "I am glad Arsene has done that. That is what great clubs should do."

Ferguson said: "When they came to Old Trafford in 2002 and Sylvain Wiltord scored the only goal, we did exactly the same."

In addition to 2002, United gave Arsenal a guard of honour at Highbury in 1991, and honoured champions Chelsea at Old Trafford in 2005. Jose Mourinho's Chelsea returned the gesture two years later.

The match sees the return of former Arsenal striker Robin van Persie, who scored a hat-trick against Villa.

"Van Persie is a massive talent, a world-class player who has fantastic technique and a lot of experience," Wenger said.

"You always miss a big player. It took us a while because our game went a lot through him but if you look at the number of goals we have scored, it's similar to last season."

Wenger said he wanted Van Persie "to be respected", while Ferguson said he expected some booing of the striker.

"For Arsenal to have one of their players go to their biggest rivals of the last 20 years doesn't sit well with their fans, nor Arsene for that matter.

"But it does happen. You just have to move on."

With four games remaining, Arsenal are in a three-way race for the Champions League spots given to the top-four teams, alongside Tottenham and Chelsea.

Arsenal are third with 63 points, two ahead of Tottenham, who have a game in hand, in fifth.

"We have no room to drop points," Wenger said. "This is another vital game for us to get the points we want.

'We are on a very strong run. We need total desire, commitment and focus to achieve what we want.