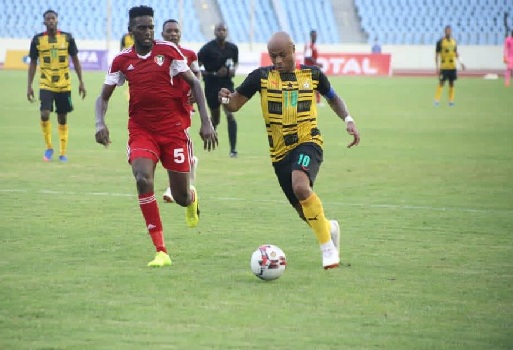 Skipper Andre Ayew scored a stunning brace to lead Ghana to a 2-0 victory over Sudan in match day three of 2021 AFCON qualifier at the Cape Coast stadium.

After a relatively quiet opening 15 minutes, the Black Stars skipper marked his 91st international appearance with a delightful free-kick to put the home team ahead.

The visitors came close to restoring parity a few minutes later through Mohamed Abdel Rahman, but the striker’s shot flew just wide of the left post.

Samuel Owusu also missed a golden opportunity to double Ghana’s lead after he was put through one on one with Ali Abdullah but the goalkeeper produced a brilliant save to keep the score at 1-0.

There was a moment of controversy in the 36th minute, the Falcons of Jediane had a strong claim for a penalty turned down by the Senegalese referee after John Boye challenged Abdel Rahman inside the 18-yard box.

A decision which did not go down too well with Sudan coach Hubert Velud, who ended up with a yellow card for his animated protest on the touchline.

On the stroke of half time, Andre Ayew headed home from Samuel Owusu’s cross but the goal was ruled out for an apparent infringement in the build-up.

After the recess, the visitors gradually got themselves in the game and began dominating possession which led to a couple of half-chances but goalkeeper Richard Ofori remained largely untroubled.

Both teams continued to trade blows until Andre Ayew took matters in his own hands late in the game with a sensational solo effort.

The Swansea Forward skipped past three men before curling a fierce shot from outside the box to seal all three points for C.K Akonnor’s men.

The result means that Ghana is firmly in control of Group C with three wins out three, 5 goals scored and 0 conceded so far.

The four-time African champions will travel to Khartoum for the reverse tie in five days’ time with a win set to seal qualification.