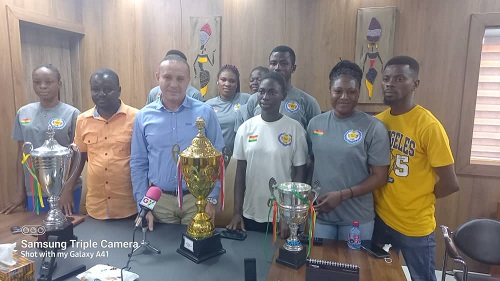 The Chairman of Samir Engineering and Trading Company Limited, Mr Nazem Karroum, has pledged to continue to sponsor El-Wak Volleyball Club and help to develop the game in Ghana.

He said his outfit would keep on to support volleyball and help make it a national pastime in Ghana.

The sponsorship is to assist young talents to achieve their best in the sports and help rekindle the interest of other for the game.

He made this comments when the El-Wak Wing Club, a Volleyball Club in Accra, called on him to present to him their African Intercontinental

Receiving the delegation of El-Wak Wing Club, Mr Nazem expressed his delight for the success of the team so far and urged them to do more.

“Volleyball, a least financed sports, represents the spirit of our company which stands for resistance and good performance and it is for this reason that we decided to give our ultimate support to promote the sports beyond what we see today,” he said.

“We are blessed to have a peaceful country like Ghana and I must say sports is prominent in sustaining the peace we are enjoying, for which volleyball as a sport plays a great role. It is a delight to have you here to present to us the fruits of our work, which is the trophies we see here,” he added.

The founder and owner of El-Wak Volleyball Club, Mr Divine Edem Dotse, expressed his ultimate gratitude to Samir Engineering and Trading Company Limited for their total support for the club and promised to do more with help they would received.

“Since the introduction of volleyball in Ghana in 1978, there has not been any civilian team which has won a trophy in Ghana. This is the first time a team from Ghana has won a trophy. This honour, I must say, would not have been possible without the support of Samir Engineering, led by a generous chairman in the person of Mr Nazem,” he announced.

Samir Engineering is a general trading, imports and exports company in Accra. Its office opposite Prudential Bank at Kaneshie on the Obetsebi Lamptey Circle road.

They are the sole agents and distributors of Yokohama tyres from Japan and Vee Rubber Tyres from Thailand.