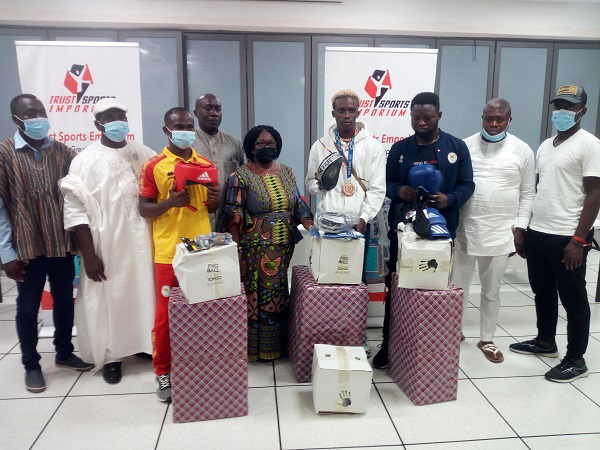 Bronze medalist, Samuel Takyi and two other Olympians Sulemanu Tetteh and Shakul Samed all received equipment and various training packages by the TSEL.

Speaking at the donation yesterday, the Board Chairperson of the TSEL, Mrs Joyce Wereko-Ampim, announced a two-year training package for Takyi in addition to boxing equipment for winning bronze at the games.

Mrs Wereko-Ampim added that Tetteh and Samed would receive a one year training package and personal training equipment for participating in the Tokyo games.

“We supported the team with a GHc50,000 package before they left for the Olympics and after making the nation proud, we are here to reward their efforts.

“With their achievement, the TSEL is proud to say that its agenda of developing a pipeline of world class athletes is well on track and we are ready to ensure that it remains live with prospects for the future,” she said.

Takyi was grateful to the TSEL for the donation and said the two-year training package would help in his development towards his professional career.

“This donation came at the right time and I have to thank you for all that you did for me and the amateur team. I believe that the training package would go a long way to help my career development, especially at the professional ranks,”Takyi said.

The President of the Ghana Boxing Federation (GBF),Mr George Lamptey, thanked the TSEL for their continuous support and called for more collaboration to help put amateur boxing first in the country.

“We are glad for all you did for us during our preparations for the Olympics and we look forward to maintaining this collaboration to help put amateur boxing first in the country,” Mr Lamptey noted.