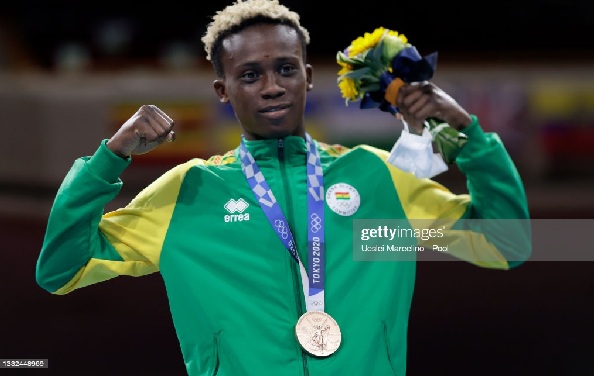 The trainer of Olympics bronze medallist, Samuel Takyi, says his team is weighing the potential bids from interested managers and promoters over a possible signing for a professional career.

Lawrence Ampofo, founder of the Discipline Boxing Gym in Accra, told the Graphic Sports that they were carefully evaluating all the offers on the table before making a decision on which promoter the young boxer would commit the next chapter of his promising career.

Amofo's comment further reinforced suggestions that a professional career beckons the young boxer, and the world may just have seen the last of Ghana's 2020 Olympic Games hero as an amateur.

In fact, last Saturday Takyi revealed that he was no longer going to fight as an amateur and would turn professional following his exploits at the Tokyo Games, where he ended the nation’s 29-year medal drought as the sole medallist.

"Me and my coach are ready for professional. I have a dream, I have to make it, I am young and I have a record to break. We must make it earlier," the boxer said on TV3’s Warm Up Plus programme.

However, the man who discovered the poster boy of amateur boxing said his team was in no rush to commit Takyi to a particular promoter for a professional career.

“There are so many offers on the table but we are not in a hurry to take a decision. We want to evaluate all of them and choose the best going forward.

“We are being careful because we don’t want to mess up with Takyi’s career. I think when we take a decision; everyone would be glad that it was the best,” Ampofo noted.

Two weeks ago, Ghana boxing legend and former WBA welterweight champion, Ike 'Bazooka' Quartey, told the Graphic Sports that it was about time Takyi turned pro because he had world title potential which must be managed well to reach higher heights in the coming years.

This month, Takyi cut a slice of sporting history as he joined Clement 'Ike' Quartey, Eddie Blay, Prince Amartey and the 1992 Black Meteors squad as Ghana’s only five Olympics medallists.

Following his achievement in Tokyo, President Nana Addo Dankwa Akufo-Addo rewarded the boxer with a brand new car and $10,000 in addition to $20,000 in a career development fund.

Takyi’s rise to fame has been attributed to coach Ampofo, his uncle who discovered and nurtured him from age nine before he joined the Black Bombers and qualified for the Olympics in Tokyo.

When asked about Takyi’s future, the US-based trainer explained that he was ready to do everything possible to ensure the youngster reached higher heights and his full potential in the ring.

“The future looks bright but he must not be complacent and I am here to guide him,” said Coach Ampofo. “We have come a long way to allow complacency to destroy what has been pursued for all these years.

“It is my job to get the best out of him and I am determined to achieve that with him.”