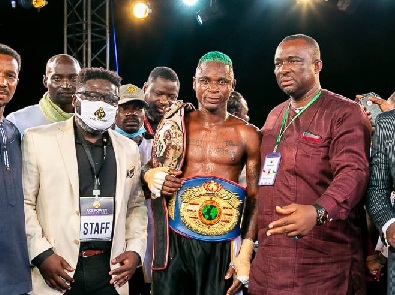 Robert Quaye (2nd right) in the company of the Ghana Boxing Authority (GBA) president, Peter Zwennes (right) and other officials after the fight

Robert ‘Stopper’ Quaye made a huge statement last Saturday night when he stopped Nathaniel Nukpe in just a round to win the UBO Super Lightweight title at the La Palm Royal Beach Hotel in Accra.

Quaye’s powerful shots right from the sound of the opening bell were too strong for Nukpe who decided not to continue with the fight after being dropped to the canvas.

However, Nukpe described the decision by the ring announcer to introduce him as a Togolese in the ring despite he being a Ghanaian as his reason for refusing to continue  the fight.

“I was ashamed to have been referred to as a Togolese despite being a Ghanaian from Aflao in the Volta Region,” said Nukpe after the bout.

“I felt no need to continue with the fight knowing very well that I was fighting as a Togolese instead of being Ghanaian and so I decided to quit.”

The incident marred the main event of the ACE Power Promotions card which was dubbed ‘Danger Zone,’ especially with the heated exchanges that had been generated from both boxers in the build-up to the bout.

Prior to the Quaye versus Nukpe fight, Holy Dorgbetor and Success Tetteh had thrilled fans with an impressive bout which saw the former earning a deserved unanimous decision victory.

Judges Michael Neequaye and Clement Ashong both scored the bout 120-105 with Shadrack Acquaye scoring it 119-105 in favour of Dorgbetor who dominated the fight from the opening bell.

In other bouts, Tanzania’s Loren Japhet earned a second round knockout win over Sherif Kareem of Nigeria in their super bantamweight contest while Raphael King stopped Emmanuel Allotey in round five of their welterweight contest.

Victor Kuwornu made his long-awaited return to the ring with an eighth round technical knockout win, light heavyweight Ahmed Abdula finished off James Owoo in round two, with Emmanuel Quartey stopping Billy Quaye in two rounds during a super featherweight contest.