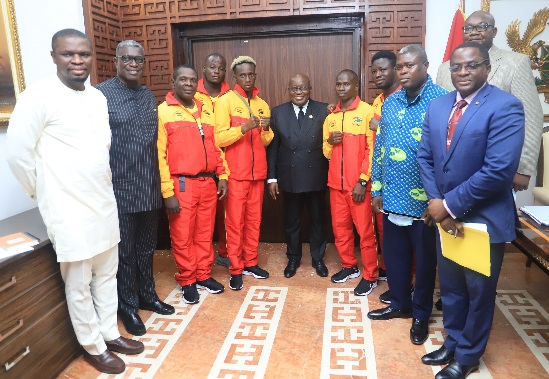 President Akufo-Addo with Mr Mustapha Ussif (left) Minister of Sports a delegation from the Team Ghana after a meeting at the Jubilee House
30.5k Shares

President Nana Addo Dankwa Akufo-Addo has expressed confidence in Ghana's team which will be participating in the forthcoming Olympic Games in Tokyo, and encouraged them to strive hard to bring home a number of medals.

President Akufo-Addo said the athletes carried the hope of Ghanaians for a good performance at the global competition, and that although it would not be easy, he was confident that the team would excel and lift the flag of Ghana high.

President Akufo-Addo expressed the confidence when a delegation from the Ghana Olympic team paid a courtesy call on him at the Jubilee House to bid him farewell as they travel to Japan to prepare for the games.

“I have to wish you the very best of luck when you go there. You cannot be better than your best. But at least do your best and I am sure that your best is going to be good enough to bring home a medal or two,” he encouraged them.

He said he was aware that the games would be very competitive because the athletes would meet some of the world's elite stars striving to excel for their countries but noted that he had confidence in the Ghanaian athletes because they always excelled wherever they competed in the world.

President Akufo-Addo recalled Ghana's strong boxing tradition where both amateur and professional boxers excelled, and made particular mention of the late Eddie Blay who excelled at the 1964 Olympics in Tokyo where he won a bronze medal in the light welterweight division.

He assured the team of support from Ghanaians while they compete in Tokyo, adding that, “if you hear some screams it will be from here in Ghana, shouting for you".

Ghana Olympics Committee president, Mr Ben Nunoo Mensah, introduced the delegation which included four of the athletes who have qualified to represent the country, saying they had come to the Jubilee House to seek the blessing of the President and also to express their gratitude for his support for the Olympic team and sports in general.