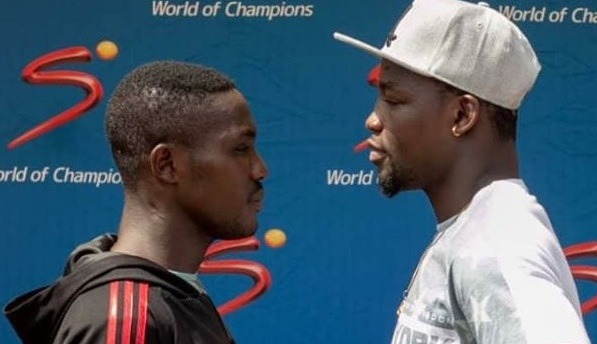 Sheriff Quaye (right) and Michael Ansah will fight for the third time on March 6
30.5k Shares

The much-anticipated trilogy fight between Michael ‘One Bullet’ Ansah and Sheriff ‘One Time’ Quaye will come off on March 6 and will serve as a Commonwealth title eliminator.

According to boxing promoter Alex Ntiamoah, CEO of Box Office Sports Promotions, the bout is expected to offer the winner an opportunity to challenge for the Commonwealth title crown in the United Kingdom.

Bragging rights will be up for grabs when the rivals meet up for the third time, having fought twice with victories split between the boxers.

Quaye won their maiden bout via a split decision in 2018 before Ansah came back stronger to earn a seven-round stoppage victory in a rematch in 2019.

A planned third clash was slated for March 7 last year but was cancelled just days to the fight following an ankle injury sustained by Ansah during training.

This time, however, both fighters have agreed to slug it out again in a trilogy fight, and the promoter believes everything has been put in place to ensure an eventful night of boxing.

“Both boxers have agreed to fight for the third time and I believe the bout will go on as planned without any distractions,” Mr Ntiamoah told the Graphic Sports.

“The fight is not just going to be an ordinary contest but a Commonwealth eliminator which will offer the contestants the opportunity to challenge for the title.”

The Box Office Sports Promotions’ March 6 fight night is set to open the boxing calendar in the country with all COVID-19 precautionary measures tobe observed at the venue.