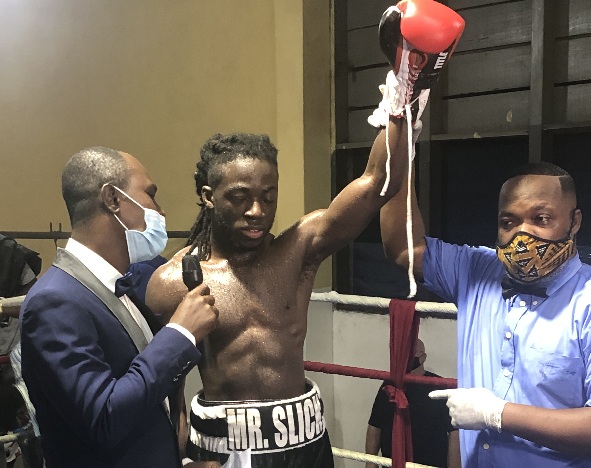 America-born Ghanaian fighter, Eslih Owusu, has described his debut fight in Ghana as an emotional one that needs to translate into titles in the future.

Owusu said he expects to build his career from the country of his parents and looking forward to having more fights here.

The 20-year-old made his maiden super welterweight bout in Ghana count by claiming a third round stoppage win over veteran Benjamin 'Congo Soldier' Ankrah at the Seconds Out Gym in Accra on Thursday.

In an interview with the Graphic Online after his victory, Owusu described Ankrah as a tough opponent who gave him troubles.

“He is a good fighter and I have to acknowledge that. It was an emotional night for me especially the manner in which I won was impressive,” Owusu said.

Owusu decided to study Ankrah in the opening minutes of the bout by relying on his jabs after the opening bell. He then attacked him in the latter stages of round one.

The southpaw went straight to business in the second round by throwing more combinations to the head and body of Ankrah. However, Owusu got caught by a big right hand to his chin which nearly sent him down.

With former World Boxing Association’s (WBA) welterweight champion, Ike Quartey, in his corner, Owusu was advised to concentrate on working on Ankrah’s body which slowed his opponent in the third round.

Owusu went in for that advice and it paid off by earning a stoppage win before the end of the round.

Trainer of Owusu, Daniel Oko Odamtten, was impressed with his boxer’s performance and described him as a world title material in the future.

“I’m glad he proved to be a very good fighter tonight and having to mark his debut in Ghana this way is very impressive.”

On the undercard, undefeated Faisal Abubakar stopped Francis Mensah in two rounds to extend his wins to six while Jacob Dickson earned a first round knockout win over John Duku in their cruiserweight contest.

In a welterweight bout, Moses Lartey lost by knockout to Jacob Laryea in the opening round and Solomon Martey beat Isaac Okine via a third round stoppage.

On the other hand, Richman Ashiley made his ring return in ten months with a round four stoppage win over Enoch Lamptey in a  lightweight contest.