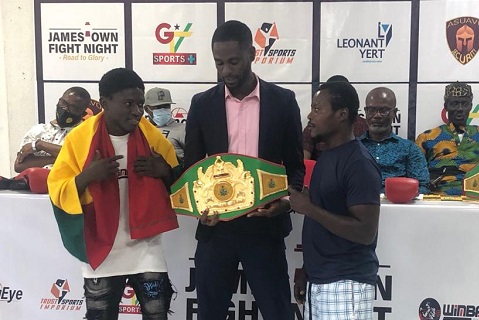 Flyweight contender, Mohammed Aryeetey, has vowed to teach Isaac Quaye new boxing tricks when they clash for the national championship at the Bukom Boxing Arena on Saturday.

Aryeetey believed it was time for him to win the national flyweight title to kickstart his quest to become a world champion in the future.

The 18-year-old is undefeated in five professional bouts and remains one of the prospects in the country. He is expected to headline a Winbase Promotions Bill in Accra on Saturday.

Speaking at a press conference last Friday, Aryeetey called on his supporters to come on time to avoid missing out on a packed action.

“He is old and can’t stand me in the ring,” said Aryeetey. I will prove that to him when the time comes.

“He is more experienced in the ring but all his tricks are old and I am coming with new ones in the ring,” he said.

“I need this win badly to put me on course for my world title ambitions in the future,” he added.

Quaye, who is making a return after a three-year wait, also assured that he would teach Aryeetey a boxing lesson on Saturday.

The much-experienced fighter said he was ready to give a good account of himself when he faced his opponent.

“He is a young guy who is now learning the sport, so I will teach him in the ring on Saturday.

“What I can assure you is that, I will give a good account of myself in the ring on the night,” Quaye stressed.

For his part, the Chief Executive Officer of Winbase Promotions, Edwin Loyd Evans, said his outfit was committed to selling off a great show.