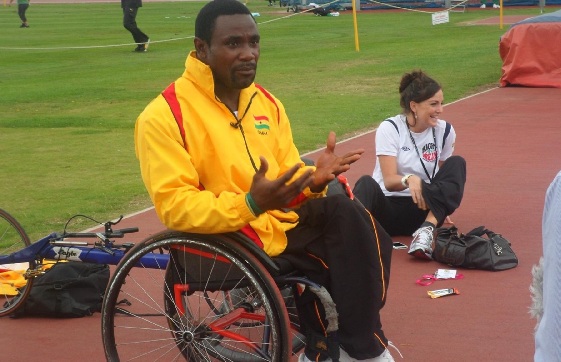 The National Paralympic Committee of Ghana (NPC-Ghana) has defended their decision to overlook Raphael Botsyo Nkegbe for Yusif Amadu to represent the country at the Paralympic Games in Tokyo.

In an emotional post on his Facebook wall, Botsyo lamented the body’s decision to exclude him from the competition despite making the qualification time.

“After working hard since 2019 for my qualification to Tokyo Paralympic Games, by God's Grace and the support of my fans and sponsors, I was able to make the qualification time of 14.22 seconds, which placed me seventh in the world ranking and fastest in Africa in 100 metres (T54 class).

“I am sorry to inform all that based on a decision by the NPC Ghana board, I will not be able to take part in the Tokyo Paralympic Games as planned and I wish to thank you all for your massive support and the love you have always shown me in my sporting career.

"To my sponsors, I can only say the journey is not over because our next focus is the 2022 Commonwealth Games, 2023 African Games and the 2024 Paralympic Games in Paris,” the athlete wrote on Facebook.

However, president of the NPC-Ghana, Mr Samson Deen, explained that Botsyo’s exclusion was a collective decision by the board after subjecting the decision through voting when faced with a choice between the Dessert Challenge champion and Amadu.

Explaining further to Graphic Online on Monday, Mr Deen said Botsyo’s earlier claim to have qualified for the Paralympics was not exactly the case because the wheelchair cyclist only made the qualification mark but needed to be certified by the International Paralympic Committee (IPC) to qualify to participate in the August 24 – September 5 event in Tokyo.

“When the IPC wrote to us, they told us that Ghana did not have any athlete who had qualified per the ranking and per the high-performance qualification from 2018-2021 currently.

“IPC then wrote to us informing us that we do not have any athlete who had made automatic qualification but Ghana would be considered to present one athlete.

“The one athlete per our understanding and per explanation they gave us did not even give room to Botsyo or Yusif Amadu at all,” Mr Deen said.

The NPC-Ghana boss explained that because the IPC letter specifically stated that the opportunity should be given to a male athlete, the board decided to choose between Botsyo and Yusif, both of whom made good qualification times during the qualifiers in 2019.

He also noted Botsyo might have been a victim of his own decision after he turned down an invitation by the NPC to attend camping in Cape Coast.
“The worrying part of this whole show is that the NPC went and looked for money to organise camping for all our athletes, including those who we knew were not qualified. We invited all athletes, including Botsyo, but he did not come,” he said.
According to Mr Deen, Ghana’s team for the Paralympics, comprising power lifter Emmanuel Tettey-Oku and paracyclist Frederick Assor, had already left for Tokyo ahead of the competition which starts next week Tuesday.