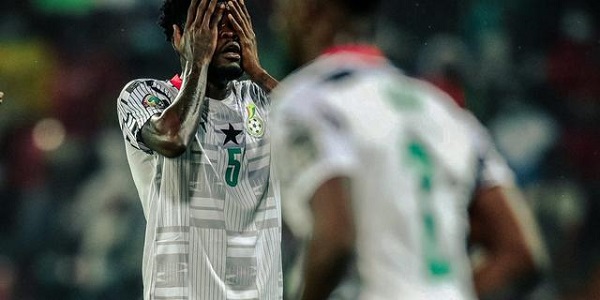 A second half brace by Ahmed Mogni, coupled with a red card to Andre Ayew ended Ghana’s  2021 Africa Cup of Nations (AFCON) dream on a disastrous note after losing 2-3 to Comoros at the Stade Roumde Adjia in Garoua yesterday.

Mogni’s strikes in the 62nd and 85th minutes blighted what nearly turned out to be a massive comeback for Ghana after bouncing back twice in the crucial Group C thriller.

Comoros scored from their first ball on target in four minutes through El-Fardou Ben Mohammed, before an individual brilliance by Ahmed Mogni in the 63rd minute gave the South-East Island a shocking 2-0 lead.

However, the Stars’ determination to force a win and sail through to the knockout phase of the tournament hit a snag after dangerman Mogni struck twice to show the West African giants the group exit for the first time in 16 years.

Ghana had a first half nightmare to forget in a hurry after referee Traore Boubou gave Ayew the marching orders after crashing into goalkeeper Salime Boina and was given away by VAR.

Referee Boubou was convinced Ayew fouled goalie Salim Ben Boina in the 25th minute after the Stars skipper’s brave attempt to get the ball past his opponent. The injured goalie Boina was later replaced by agile Ali Ahmada.

Ghana were made to pay for not playing a holding midfielder when Comoros skipper Mohammed lashed the ball with incredible pace and power to the bottom right corner of the post for the opener.

The early deficit forced the Ghanaians to search for a quick equaliser but the Comoros defence worked tirelessly to keep the Stars from penetrating.

On the 39th minute, Thomas Partey was called to action but his nicely taken free-kick went off target with the game ending 1-0 in favour of Comoros.

The Stars came into the second half with the urgency to force a goal and Issahaku came close but his corner-kick was wasted.

Ghana were all over the pitch looking for a goal to change the trend of the game as Coach Rajevac introduced Joseph Paintsil and Richmond Boakye-Yiadom for Issahaku and Sulamana after 60 minutes.

Two minutes later, Mogni netted the second goal for Comoros with a strike from the edge of the penalty box.
Coach Milo’s changes paid off in the 65th minute when substitute Boakye-Yaidom’s header from Kyereh’s corner kick went straight into the top corner of the net.

Kyereh came close to scoring in the 75th minute but his goal-bound free-kick were saved by goalkeeper Ahmada.

Djiku snatched the much-needed equaliser in the 77th minute from a skipper Partey header to make the scoreline 2-2.

The Ghanaians’ decision to chase for a winner was capitalised on by Comoros in the 85th minute after Benjaloud Youssouf put the ball on a plate for Mogni to finish off from close range.

The defeat ended a poor AFCON outing for Ghana with just a point in three Group C matches.