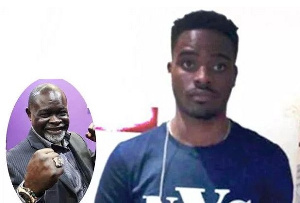 A Boxing legend, Azumah Nelson, says his son, Dalvin Azumah Nelson Junior, is no longer interested in the sport and has therefore taken a walk.

He cited comfort and lack of motivation as reasons for his son’s inability to step into the ring and take after him.

In defence of his son, he told the Graphic Sports that boxing should never be forced on anyone since it was a painful and hurtful sport, and as such one must attempt it on his own volition.

“Dalvin is not interested in boxing, he just finished his national service and it appears he is looking forward to further his education and do something not related to boxing,” the boxing Hall of Famer told Graphic Sports exclusively in an interview in Accra last Thursday.

Azumah maintained that his son, 25, regarded boxing more like a hobby and that was what it meant to him now.

“You know, he doesn’t see the need to box, he has no motivation, he does not hustle for anything, unlike me who came from a poor background and wanted to come out of poverty at all cost,” he explained.

The former world champion, however, stressed that the doors were still open should Junior, as he affectionately calls his son, decided to come back to the profession.

But with his focus now on education after graduating from the University of Ghana, the young boxer is set to switch to another profession.

“For me, I will support whatever he does, and I’m fully behind all his decisions. In case he changes his mind too I will be glad to train him,” the  World Boxing Council's Greatest Super Featherweight of All Time stated.