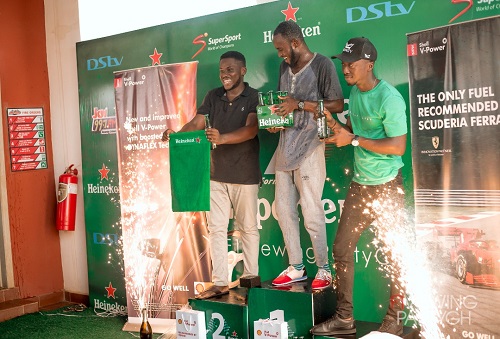 Adaboro (middle) flanked by the other winners
30.5k Shares

Joseph Sori Adaboro became the eventual winner of the maiden edition of the Heineken FI Viewing Party go-kart championship at the A1 race way in Community 25.

By this victory, the F1 fan has also won an all-expenses-paid trip to watch the Formula 1 season finale grand prix at Abu Dhabi in December.

Adaboro’s driving skill was of no doubt as he exhibited it in the track by overtaking his other challengers to win the ultimate.

At the end, Makafui had to settle for the second position while Andrew also crossed the finish line to pick the third position.

Conveyer of the Formula 1 Viewing Party was happy by the event and stated that it was to usher in the new season of the Bahrain Grand Prix which was schedule to start on March 28.

“This event is the curtain raiser for the 2021 formula 1 season event in Ghana ahead of the first race of the Bahrain GP on Sunday March 28”, he said.