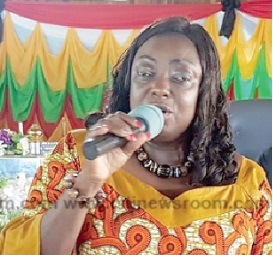 A Minister of State at the Ministry of Works and Housing, Freda Akosua Prempeh, has stated that the government's current policy direction on mass entrepreneurship under the YouStart will lead to more sustainable jobs.

She said YouStart offered a solution to the unemployment problem among the youth.

Answering a question in Parliament, Madam Prempeh said the consolidated approach and the major drive towards entrepreneurship under YouStart, would affect the business-minded youth among the Nation Builders Corps (NABCO) trainees currently at the exit phase of the NABCO Scheme.

The National Democratic Congress (NDC) Member of Parliament for North Tongu, Mr Samuel Okudzeto Ablakwa, had sought to know the government's policy on the status of NABCO trainees after the expiration of their three-year engagement which lapsed at the end of October 2021, and plans for more sustainable job creation.

“Mr Speaker, within the 2022 budget, the government has consolidated its approach to employment hinged on entrepreneurship under the YouStart programme. The YouStart will enable young people to seek and be supported both technically and financially, to start and set up their enterprise," she told Parliament last Tuesday.

Madam Prempeh, who is also the New Patriotic Party (NPP) MP for Tano North, said the status of the remaining trainees on the NABCO Scheme were tied to their elected career pathways; permanent employment, entrepreneurship and further learning.

“Mr Speaker, the first batch of NABCO trainees' three-year engagement lapsed at the end of October 2021. NABCO as a well-structured voluntary programme has provided work and learning experiences for those who voluntarily signed onto the scheme in 2018. The work option is meant for trainees to put their foundational education background to use, build and acquire additional skills within the work environment," she said.

“Mr Speaker, in line with the pathways set above, as an exit arrangement, some of the trainees were offered permanent employment by the lead agencies before the expiration of their three-year tenure,” she stated.

According to the minister, NABCO would continue to collaborate with other agencies and programmes to provide entrepreneurship support to those trainees, among the 67,657 with viable and innovative business ideas to become entrepreneurs, adding that collaboration was currently ongoing with the National Entrepreneurship and Innovation Programme and the Ghana Enterprise Agency under the YouStart.

She noted that all other trainees were being prepared through the transition into sustainable employment opportunities or their chosen career pathways outlined earlier.