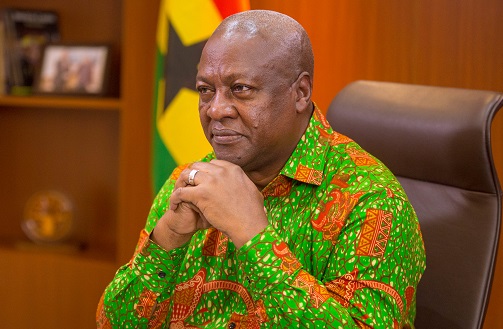 Former President John Dramani Mahama, the petitioner challenging the outcome of the 2020 presidential election, has failed in yet another attempt to have the Chairperson of the Electoral Commission (EC), Mrs Jean Adukwei Mensa, testify in court.

The Supreme Court yesterday dismissed Mr Mahama’s application seeking leave (permission) to reopen his case to enable his lawyers to subpoena Mrs Mensa to appear before the court and testify.

In a unanimous decision, the seven-member panel of the apex court held that the application was without merit because the petitioner could not provide any cogent legal justification to back it.

It was the considered view of the court that Mr Mahama did not indicate to the court the sort of evidence he needed from the Chairperson of the EC and how the said evidence would aid in the determination of the petition.

“Neither has he (petitioner) disclosed how that evidence will advance the cause of his petition. For the advanced stated reasons, we find no merit whatsoever in the petitioner’s application to reopen his case,” it ruled.

The ruling was read by the Chief Justice and President of the seven-member panel, Justice Anin Yeboah.

This is the second failed attempt by Mr Mahama, who was the presidential candidate of the National Democratic Congress (NDC) in the December 2020 elections, to get the Chairperson of the EC into the witness box to enable his lawyers to cross-examine her.

In the first attempt, his lawyer, Mr Tsatsu Tsikata, objected to a decision by the EC (the first respondent) not to adduce any evidence, which ostensibly meant that Mrs Mensa would not testify.

The court, however, overruled that objection on the basis that the rules of court and decided cases did not grant it the power to compel a party to adduce evidence if the party decided not to do so.

Barely an hour after that ruling on February 11, 2020, Mr Mahama filed the application seeking leave to reopen his case, which was dismissed yesterday.

One of the arguments canvassed by Mr Tsikata in support of the application to reopen his client’s case in order to subpoena Mrs Mensa was that the EC Chairperson must be made to account to the people of Ghana for her stewardship during the December 7, 2020 elections.

Counsel argued that it would be in the interest of justice for Mrs Mensa to enter the witness box and vindicate herself of all the allegations levelled against her.

In dismissing that argument, the court held that it was the EC, and not the EC Chairperson, which was dragged before the court, and, therefore, Mrs Mensa had no obligation to vindicate herself by testifying.

“How can the chairperson vindicate herself when she is not on trial before us? She was not personally sued or arraigned before this court on any complaint or accusation, civil or criminal, for which she must explain or account to anybody for anything she had done or not done,” the court held.

The highest court of the land held that per the application, former President Mahama was seeking to solicit evidence from the EC Chairperson in support of his case.

Such a move, it said, was not in tandem with the adversarial system of litigation subscribed to by the country.

“In law, a plaintiff or petitioner does not require evidence from his or her adversary in an adversarial system like ours to prove his case. A petitioner succeeds on the strength of his or her own case,” it held.

Mr Tsikata had also argued that he wanted to subpoena Mrs Mensa as a witness of the petitioner, but as what is described as a ‘hostile witness’.

The court, however, ruled that Mrs Mensa could only be a hostile witness if she were a witness of the petitioner’s, had entered the witness box and testified against Mr Mahama.

“A witness who is yet to enter the witness box cannot be called a ‘hostile witness’ under any circumstances,” it ruled.

‘She cannot be forced’

Another basis for the application, as presented by Mr Tsikata, was that Mrs Mensa had indicated to the court, through affidavits, that she would make herself available for cross-examination.

Counsel submitted that per Section 26 of the Evidence Decree, Mrs Mensa was bound by her own statements and must avail herself for cross-examination.

In dismissing that argument, the court held that Section 26 of the Evidence Decree did not apply in the petition because the EC (the first respondent) had decided not to adduce any evidence, which is supported by Order 38 Rule 3E (5) of the High Court (Civil Procedure) (Amendment) Rules, 2014 (C.I. 87).

“The rule permits a party to call or not call a witness to testify, as the mere filing of a witness statement does not constitute an election to testify,” the court ruled.

In his petition, former President Mahama contended that no candidate won the 2020 presidential election and, therefore, the declaration of President Nana Addo Dankwa Akufo-Addo as the winner of the election by Mrs Mensa was “null, void, unconstitutional and of no legal effect”.

Former President Mahama, therefore, wants the Supreme Court to declare the declaration on December 9, 2020, as null and void and also order the EC to conduct a run-off between him and President Akufo-Addo.