You can't create regions in name only, develop them - Mahama 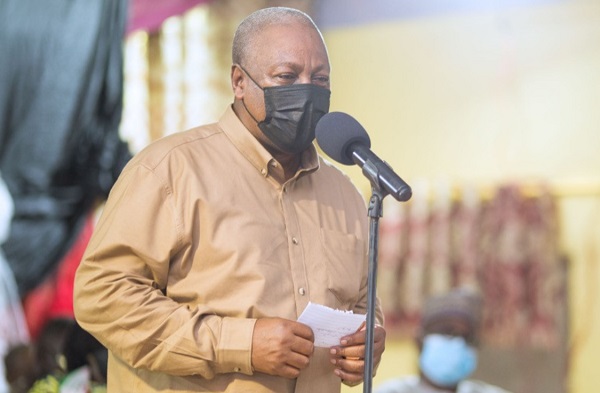 Former President and 2020 Presidential candidate of the NDC, John Dramani Mahama, has called on President Nana Akufo-Addo to address the developmental needs of the newly created North East region.

The former President is in the region on the second day of his tour of the five northern regions to thank Ghanaians for their vote and support in the 2020 elections.

Speaking at a gathering of party executives and supporters at Nalerigu, Mr Mahama said what makes a region is infrastructural projects and not just boundaries demarcating regions.

He said: "You cannot just create regions in name. The regions must be worthy of being called regions. And it is infrastructure that makes a region a region.

Mr Mahama added: "We don't only need the regional boundaries to be re-drawn; we need regional infrastructure so that when you come you will say yes, this is the North East Region."

Stating that the NDC is a party that thinks about the people, the former President expressed regret over NDC-initiated projects in the region that have been abandoned by the President Akufo-Addo administration.

"I went and greeted the Nayiri and before that, the Gambagarana and Gambaga Imam and the common refrain is when is this government going to continue the projects that were left-off by the NDC administration," he said.

Among the projects that he said had been abandoned include; a new site for the Gambaga College of Education, Community Day Senior High Schools, and the Nalerigu-Bunkpurugu-Nakpanduri road.

Mr Mahama also decried the increasing spate of armed robberies in the region. He identified low morale and the lack of logistics for the police to fight crime as part of the reasons for the insecurity and called on the government to urgently address the situation.

"The government should avert its mind to the security situation in the northern part of the country. There can be no progress and prosperity without security," he said.