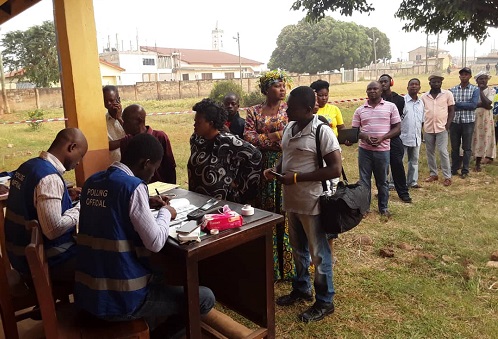 Ghana's democracy will be deepened at both the local and central government levels if Ghanaians vote “Yes” in the December 17, 2019 on the election of metropolitan, municipal and district chief executives(MMDCEs).

A former lecturer at the Methodist University College, Dr Bonsu Osei-Owusu, who stated this in an interview with the Daily Graphic said the election of the MMDCEs would make them independent of government control.

Government still imposes MMDCEs on the people,’’ he said.

According to Dr Osei-Owusu, the Constitution provided that 30 per cent of the assembly members who were professionals be appointed by the President in consultation with the traditional council within the district to help implement policies that would benefit the local people.

He added that ‘‘the selection of these professionals who may not stand for elections was to bring their expertise to support the district grow, but since 1993 governments have never done that but rather appointed party men and women who would vote for whatever policy the DCE brings on board no matter the outcome’’.

Dr Osei-Owusu was of the view that unlike the general elections where the electorate voted twice for both the presidential and parliamentary candidates, the December 17 election would be a tripartite one in which Ghanaians would vote to elect assembly members, unit committee members and determine whether MMDCEs should be elected on the same day.

He said the nation might experience an impressive voter turnout because it seemed the two political parties – the New Patriotic Party (NPP) and National Democratic Congress (NDC) - were in support of the referendum, so they would encourage their supporters to go out in their numbers to vote ‘Yes’.

‘‘When it comes to assembly elections, the interest of the people is not like the national elections because someone who has his or her vote in the village does not see the essence of travelling far to vote for an assemblyman or woman. Even in the cities, people do not see the importance of it,’’ he remarked.

Dr Osei-Owusu pointed out that the election of the MMDCEs would ensure that those voted into power are accountable to the people within the district instead of the government in power.

That, according to him, would make the MMDCEs serve and relate well with the people to avoid being voted out of power.

‘‘This will also empower the district assemblies to decide what they want, not what the government in Accra wants. The decentralisation process will be taken to the next level,’’ he said.

Dr Osei-Owusu warned that if after the election, it turned out that some MMDCEs were from a party opposed to the one in government they might not get the needed support if care was not taken.

He said the situation could be worse if the DCE was planning to become a Member of Parliament for an opposition party in the next election, adding that the likelihood of the government in power stampeding the development process so that the DCEs in question would not take credit during electioneering would be high.

‘‘Although there will be internally generated funds, that alone will not be enough.

That is why the DCE should carry himself or herself well no matter the situation to build a good relationship with the government in power.

‘‘The election will make them accountable to the people but the DCEs will still be the representatives of the President. So how can you represent someone you are not in good terms with?’’ Dr Osei-Owusu asked.

Asked whether the political parties would be deeply involved in the election of MMDCEs, Dr Osei-Owusu responded in the affirmative, adding that it would be purely partisan because each political party would try to “push a candidate” so that the agenda of that party would be known to the voter.

Dr Osei-Owusu advised the National Commission for Civic Education (NCCE) and the government machinery, especially the Ministry of Information, to intensify their educational campaign for the referendum to achieve the needed results of 40 per cent eligible voter turnout and 75 per cent of voters in favour.