Voting takes off smoothly across Ghana

Voting has started in earnest in 38,622 polling centres across Ghana as the country elects a President and 275 parliamentarians.

From Cape Coast in the Central Region, correspondent Shirley Asiedu-Addo reports that voting in the Cape Coast South constituency took off smoothly.

Voters are observing Covid-19 protocols and going through the process orderly.

At the Third Ridge Education Flat A polling station, 25 of the 407 voters expected to vote had already cast their votes. The presiding officer, Ms Victoria Nutefe Anku said the exercise had so far been without hitches.

Similarly, at the Third Ridge Education Flat B centre, the presiding officer, Mr Isaac Adjokatse said 40 out of the 405 expected voters had cast their votes as of 7.40 am while about six others were in the queue waiting to cast their votes.

A total of 45 persons had cast their votes at the Castle One polling station in the Cape Coast South constituency where some 550 voters are expected to votes. Presiding officer, Mr Kwamena Sam said there had been no hitches.

All COVID-19 protocols were being observed, with representatives of political parties - the New Patriotic Party, the National Democratic Congress and Ghana Union Movement present.

At the Castle Two polling station a total of 80 out of the 431 voters had already cast their votes.

Presiding officer at the polling station, Mr Francis Appiah Sam said the process had been smooth.

Charles Benoni Okine reports from the Unity Church polling station at the Adenta SSNIT Flats in Accra that voting started at 7am on the dot with 396 expected to cast ballot. As at 7.28 am 21 had voted.

From the Sakumono Complex polling station in the Tema West constituency, Bernard Neequaye reports that security officers have had a hectic time controlling voters eager to cast the ballot after polls opened at 7am.

Several of them were seen stampeding to the entrance and demanding to be allowed to vote but the security officers demanded that it was done on first come first served basis.

To control the crowds and ensure sanity, numbers were issued out to those who came early.

Voting at the Sarpeiman A centre in the Amasaman constituency in the Greater Accra region, where voting started at 7am and 63 voters already voted as at 8am, Presiding officer Ransford Sowah said the process was so far so good and that there had been no hitch whatsoever. 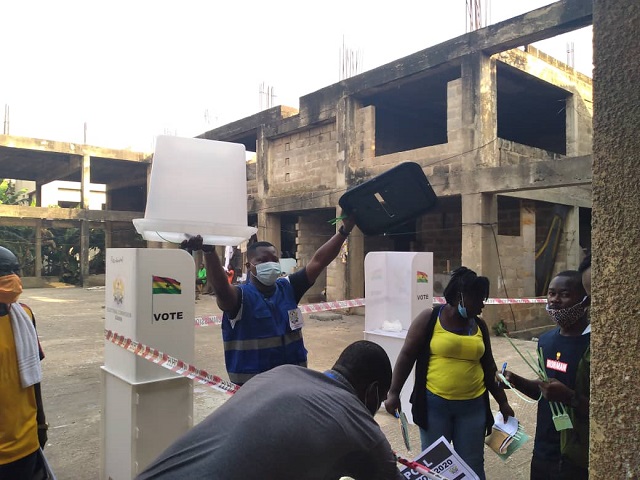 Voting got off smoothly at the NAFTI LA 1 & 2 polling stations in the Dadekptopon Constituency a few minutes past 7am, reports Samuel Doe Ablordeppey. Although some of the voters had been in the queues since 2.30am, they were generally patient as they watched electoral materials, polling officers and agents arrive.

With an explanation from the Presiding Officer, Mr Prince Kotey, for the elderly and professionals who were on duty to vote first, the long queue of voters was tolerant and allowed the privileged voters to have their turn.

Mr Kotey was seen having spirited discussions with party agents bringing them up to speed with what to expect for the day.

After the briefings, he opened the boxes containing the materials and allowed the party agents to take record of the number of items and their serial numbers, particularly of the ballot papers.

Being an elite residential area, Mr Kotey, who has worked with the EC in the last three general elections, said he expected voting to continue smoothly without any incident.

One of the early voters, Mr Delali Gomor, said he had to be an early bird because he travelled from Ada where he was now stationed after registering at his former residence to cast his ballot to be able to return on time.