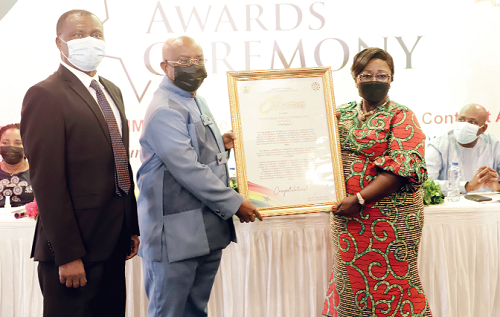 The Volta Regional Coordinating Council (RCC) has been adjudged the best (RCC) in the 2020 annual local governance service performance contract.

The Volta RCC beat the Savannah and Bono East RCC, which were adjudged second and third respectively, to clinch the coveted spot.

At an awards ceremony in Accra yesterday (Oct 20), the Nkoranza North District Assembly in the Bono East Region was also adjudged the best performing district in the rankings of Metropolitan, Municipal, and District Assemblies (MMDAs) in the country.

It is also to develop competencies, increase job satisfaction and achieve the full potential of all staff in the service in line with section 54(f &c g) of the Local Governance Act, 2016 (Act 936).

The contract is operationalised through the Performance Management Instruments (Contract & Appraisal) in which the service enters into agreement and commitment with its employees to set clear, quantifiable objectives and indicators for attainment within given timelines.

The Chief of Staff, Mrs Akosua Frema Osei-Opare, in her address at the event, described as “worrying” the increasing number of audit infractions and financial irregularities committed by some Regional Coordinating Council (RCC) and Metropolitan, Municipal and District Assemblies (MMDAs).

She said the infractions captured in the Auditor General’s report continued to plague the country’s finances, adding that as public office holders entrusted with management responsibilities, there was the need for them to support the President’s desire to protect the public purse.

She, therefore, charged the various RCCs and MMDAs to, as a matter of urgency, deal with the situation in order to boost citizens’ confidence in them.

“The continuous increase in the number of infractions and financial irregularities is worrying and the various RCCs and MMDAs must as a matter of urgency deal with it,” the Chief of Staff said.

Mrs Osei-Opare thus implored the leadership of the MMDAs and RCCs to provide transparent, accountable, visionary and exemplary leadership to help drive change and bring the needed development to their respective local areas.

That, she said, was good for effective decentralised local governance practice.

She added that in order to broaden their horizon to improve the provision of services to their citizenry, there was also the need for a change of focus, attitudes and responsiveness with enhanced skills, adding that “Assemblies must also strengthen social accountability mechanisms to boost citizens’ confidence in them”.

The Minister of Local Government, Decentralisation and Rural Development, Mr Dan Botwe, stressed that efforts of the established units of the district assemblies and the active involvement of the people within their respective jurisdictions were crucial to the development of the districts.

The ministry, he said, would fashion out appropriate mechanisms to strengthen the sub district structures to enable them to function optimally.

Consequently, the service, he said, was striving to strengthen local governance institutions and structure, reviewing systems, procedures, as well as processes and building capacities for improved service delivery at the sub-national levels.

“It therefore implies and I am very certain that the criteria for the next round of assessment would be inched up a little, all things being equal, and this must be a wake-up call for all RCCs and MMDAs,” he said.