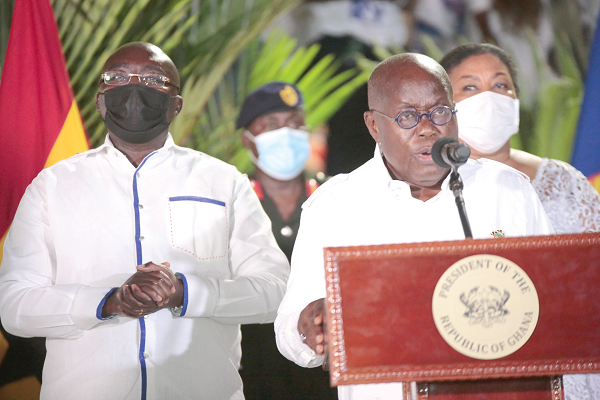 President Nana Addo Dankwa Akufo-Addo has called for unity among Ghanaians, irrespective of the political divide, to work hard to place Ghana where it deserves to be.

In a victory speech delivered in a jubilant atmosphere moments after he had been declared winner of the 2020 presidential poll, the President-elect said it was time “for each and every one of us, irrespective of our political affiliations, to unite, join hands, stand shoulder to shoulder and work hard to place Ghana where it deserves to be”.

Addressing the nation in front of the leaders and supporters of the New Patriotic Party (NPP), as well as a large gathering of media practitioners, at his Nima residence in Accra last night, President Akufo-Addo said just as he had been doing since January 2017, he would continue to work very hard to build a prosperous and progressive country.

He assured Ghanaians that he was determined to accomplish the tasks of the new mandate and thereby justify the confidence reposed in him.

President Akufo-Addo added that the victory in the election constituted, for him, “an endorsement of the policies and programmes initiated by my government and put before the electorate and I assure you that I’ll do my best not to let you down”.

He said the very slim margin between the National Democratic Congress (NDC) and the NPP with regard to parliamentary seats was a loud signal that the period for campaigning was over.

“The outcome of the election has been decided, and the Ghanaian people, through the results, have made it loud and clear that the two parties, the NPP and the NDC, must work together, especially in Parliament, for the good of the country,” he said.

Sporting a white shirt and a pair of trousers, and flanked by his wife, Mrs Rebecca Akufo-Addo, and Vice-President Mahamudu Bawumia, President Akufo-Addo said it was clear at the beginning of the campaign that the considerable amount of work done since 2017 would secure him four more years in office, adding that the declaration by the EC had set the government on that path.

He expressed his gratitude to Ghanaians for the victory, which he said had humbled him, especially by the show of confidence, a charge he said he would not take lightly.

“There could be that tendency for an incumbent President who has just secured a second term in office to, as it were, take it easy and relax because there is nothing more to lose or prove. I am of a different character,” he said.

President Akufo-Addo said his immediate task would be to continue with the process of reversing the effects of the coronavirus disease (COVID-19) on the economy and on lives.

He would also be preoccupied with putting the nation on the course of full economic recovery and development, he said.

He said before the pandemic struck, Ghana had been one of the fastest growing economies in the world and pledged to work assiduously for the country to regain that reputation.

He commended the EC commissioners, staff, as well as agents of the various political parties, for delivering one of the best elections which had won universal acclaim.

Even in the midst of the COVID-19, he added, the EC had done a yeoman's job and asked Ghanaians to urge the commission on to continue along that path and achieve even greater heights in future.

President Akufo-Addo acknowledged the orderly and peaceful conduct of Ghanaians on Election Day and applauded them for their adherence to COVID -19 safety protocols on the day, which ensured that the exercise passed off safely.

He saluted the security services for preserving the peace, law and order, as well as the media for the extensive coverage provided before, during and after the conduct of the polls.

He condemned the isolated incidents of post-election violence at Odododiodoo and in Techiman and said there was the need to avoid that in future.

President Akufo-Addo thanked the leadership and members of the NPP, adding that “NPP supporters should understandably celebrate and jubilate, but desist from untoward acts”.

At the end of the day, and in spite of holding different political views, he said, “we should all remember that we are all part of one family, one Ghanaian family, with the common agenda to oversee the growth of Ghana.”

He received his primary education in Accra, first attending the Government Boys’ School and then the Rowe Road School, before leaving for the United Kingdom for his secondary education, studying at Lancing College (1957–61).

He returned to Ghana after his studies abroad, and in 1964 entered the University of Ghana, graduating with a bachelor’s degree in Economics in 1967.

Nana Akufo-Addo returned to the UK to study Law and was called to the bar in England (Middle Temple) in 1971 and the Ghana Bar in 1975.

Among Akufo-Addo’s family members who figured prominently in Ghana’s pursuit of independence and thereafter in public service were his father, who served as ceremonial President of Ghana from 1970 to 1972; his great-uncle, the nationalist J. B. Danquah, and his uncle, Mr William Ofori-Atta.

Nana Akufo-Addo also was engaged in political activism. In the late 1970s, he served as General Secretary of the People’s Movement for Freedom and Justice (PMFJ), a group that opposed the plans of the military government in place at the time.

He won the parliamentary election in the Abuakwa Constituency on the ticket of the New Patriotic Party (NPP) in 1996 and served as a Member of Parliament  for a four-year term.

Under the presidency of Mr John Agyekum Kufuor, Nana Akufo-Addo served as Attorney-General and Minister of Justice from 2001 until 2003, and later as Foreign Minister, during which he resigned in order to contest the NPP’s flagbearership for the 2008 presidential election.

He was elected as the party’s candidate.

In the December 7, 2008 presidential election, Nana Akufo-Addo won the first round of voting with more than 49 per cent of the vote cast. However, as he did not get the required 50 per cent plus one votes, he and his closet challenger, Prof. John Evans Atta Mills of the National Democratic Congress (NDC), advanced to a second round on December 28, which Nana Akufo-Addo lost.

In 2012, Nana Akufo-Addo, on his second attempt at the Presidency, lost to the NDC’s John Dramani Mahama. He and his party challenged the election results at the Supreme Court but lost the case.

However, on his third attempt at the Presidency, he won a resounding victory, defeating the then incumbent President Mahama.