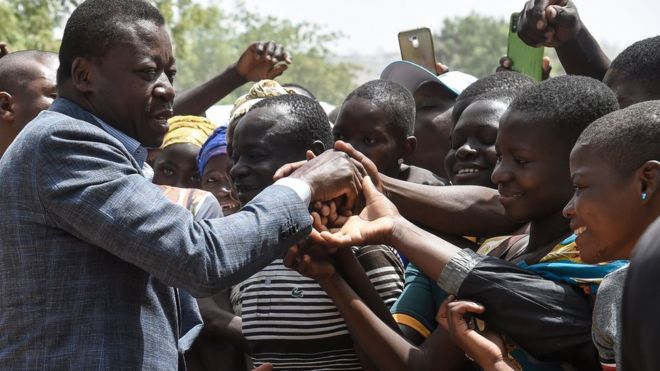 Faure Gnassingbé, left, has been president since 2005. PHOTO BY GETTY IMAGES
30.5k Shares

Togo's President Faure Gnassingbé has won re-election, according to preliminary results from the electoral commission.

However, opposition leader Agbéyomé Kodjo has accused the authorities of widespread fraud.

The president's office is quoted by AFP news agency as denying the accusation.

Togo's Electoral Commission said that Mr Gnassingbé had received 72 per cent of the vote, compared with about 18 per cent for Mr Kodjo.

The final results are expected to be announced by the Supreme Court this week.

Mr Gnassingbé has led Togo's population of eight million people since taking over following the death of his father Gnassingbé Eyadema, who ruled for 38 years.

Daily Graphic's Foreign Editor, Kate Baaba Hudson reports that last Saturday, 3.6 million Togolese went to the polls to elect a president to steer the affairs of the country for the next five years.

Seven candidates vied for the presidency.

They are the incumbent President Faure Gnassingbe, 53, candidate for the Union for the Republic (UNIR); Mr Jean-Pierre Fabre, 68, the National Alliance for Change (ANC), a former journalist and human rights campaigner who came second in the 2010 and the 2015 elections, and Dr Gabriel Messan Agbeyome Kodjo, 66, the ex-Prime Minister who is leading a coalition known as the Patriotic Movement for Democracy and Development (MPDD).

To be declared winner, a candidate must have more than 50 per cent of the votes cast.

In the event that this is not achieved, there will be a run-off between the two top candidates at a time to be announced by the Independent National Electoral Commission (INEC) of Togo.

Shortly after vote on Saturday, counting began promptly in the evening.

Though the day was calm, the home of opposition candidate Agbeyome Kodjo and two of his major supporters were surrounded by members of the military.

According to the Minister of Security, Gen. Damehame Yark, the action sought to maintain security there.

Meanwhile, in Sokodé, the second largest city in the north, the Internet was also cut off around 6 p.m., according to AFP.

The election was observed by 26 international observation missions and more than 30 Togolese civic groups.

Togo's government last week also expelled an organisation based in the United States that promotes democratic standards and observes elections.

The US government criticised the exclusion of the National Democratic Institute.

The reform was not retroactive however, meaning the president could be in power for another decade.

The winner must secure a majority to avoid a run-off, which will take place next month.

Some political analysts expected incumbent Gnassingbe, who took office in 2005, after the death of his father, Eyadema Gnassingbe, who led the country for 38 years after seizing power in a coup in 1967, to win the election.

A win for him will become the fourth time, and under the country's current law, Gnassingbe could remain in office until 2030 if he keeps getting re-elected.

But months of anti-government protests in 2017, with about 20 people killed, were a sign of impatience with the family's hold on power.

According to a Reuters report, after voting, Gnassingbe was pleased with the turnout.

“I’m confident. I’ve been supported by my campaigners and sympathisers,” he said.