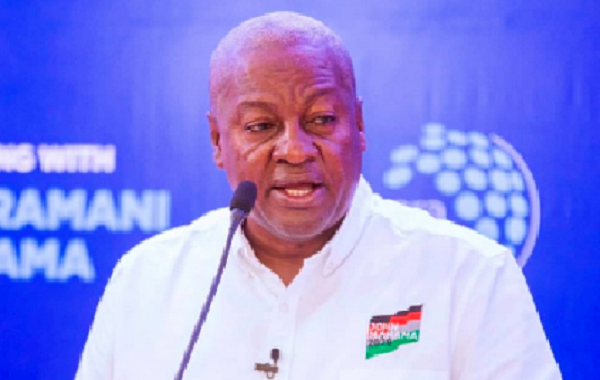 To achieve that goal, he said it was important for the government to provide an enabling environment for private sector investment.

Speaking on Accra-based Power FM today (November 9) at the start of his Greater Accra Regional ‘Thank You’ tour, Mr Mahama said, "the opportunities are there if we put our investment in the right places".

He said in the interest of national development, the government could tap into the one million jobs initiative in the National Democratic Congress (NDC) manifesto for the 2020 elections.

He explained that the one million jobs initiative was more focused on creating sustainable jobs in the agriculture sector through the prioritisation of agro-processing.

Mr Mahama noted that as part of the one million jobs initiative, processing plants were to be set up in the Bono, Bono East and Ahafo regions for the processing of cashew.

He also said more attention had to be given to the oil palm industry to create more jobs.

"We believe that investment in these areas in line with the one million job initiatives will create opportunities for many people to earn a livelihood.

The government can look at it and implement it in the national interest," he said.

The former President accused the government of contributing to the unemployment situation in the country through the closure of some indigenous banks that were the main providers of loans for small and medium enterprises (SMEs).

He observed that following the closure of the banks, SMEs found it difficult to access loans from the big banks and financial institutions.

He also blamed the government for what he described as "excessive borrowing".

Mr Mahama said although the public debt had risen from GH¢120 billion in 2016 to GH¢375 billion in 2021, the government had failed to invest in infrastructure and only focused on consumption expenditure.

He said it was worrying that while the government borrowed more, it had failed to put the resources to good use.

Touching on the fight against corruption, the former President blamed President Nana Addo Dankwa Akufo-Addo for paying lip service to dealing with the menace.

This is a big indictment on his corruption fight," he said.

Again, he said although some government officials were reported to have been involved in corruption, they were cleared through non-transparent processes.

Mr Mahama said the posture by the President to always insist that whistle blowers brought hard-core evidence against public officials before they were investigated did not paint a good picture of someone who was willing to fight the menace.

"There will be cases of corruption in every government but how you deal with them when they occur is what matters," he stressed.

The former President said his tour of the 16 regions this year showed that there was economic hardship in the country.

According to him, the mood across the country was that of despair and disappointment as people had unmet needs because of the government's unfulfilled promises.