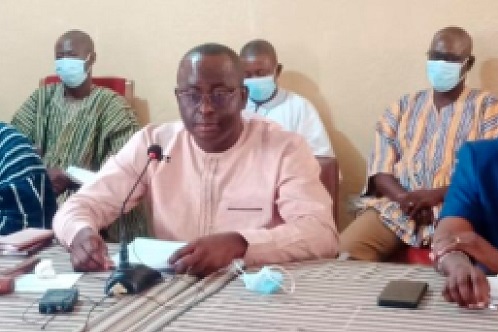 The Upper West Regional Minister, Dr Hafiz Bin Salih, has advised Municipal and District Chief Executives (MDCEs) in the region to endeavour to stay in their respective jurisdictions for effective delivery of their mandate.

“All appointees, you have until the end of this month to move to your respective jurisdiction-go there, stay there and live with the people,” he said.

Making the call at the swearing in of three MDCEs in Wa, Dr Bin Salih said the Regional Coordinating Council would no longer tolerate the situation where some of the MDCEs lived outside their jurisdiction and commuted on daily basis.

He said the practice of staying in Wa commuting to the districts was affecting the coffers of the various assemblies and that could not be allowed to continue.

He also advised the MDCEs to strike good relations with their traditional and religious leaders, adding that they were key stakeholders and that if they wanted their stay in the community to be peaceful, they needed to have an excellent relation with the traditional authorities.

“Also do not forget about the hen that laid the golden egg, once you are able to do that there will be peace and harmony for us all to deliver on our mandate,” the regional minister added.

He admitted that the task on their hands was heavy, but with unity and cooperation, they would be able to surmount it.

Dr Bin Salih said the President had confidence in them and urged them not to betray him but rather work to justify their appointment.

“As politicians, there will always be a day of reckoning--we are all young men and women, there is a tomorrow where you will need the support of the people you head to either maintain your position or even go higher,” he said.