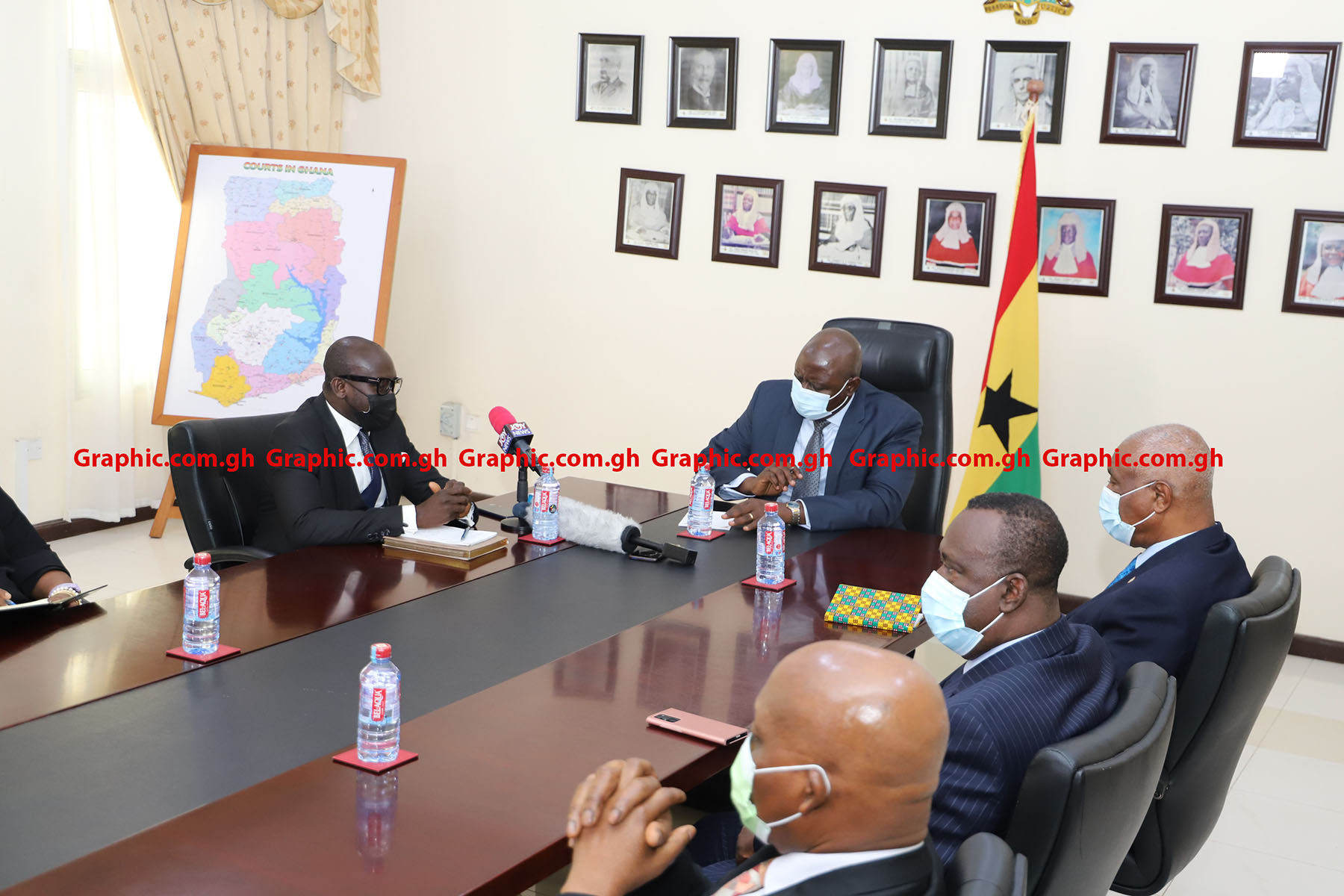 The Attorney-General (A-G) and Minister of Justice, Mr Godfred Yeboah Dame, has said he is going to prioritise the prosecution of economic and organised crimes because they do not only affect every Ghanaian but also retard development.

He has, consequently, urged the Chief Justice, Justice Kwasi Anin Yeboah, to create specialised courts for the prosecution of such crimes to help in the acceleration of the national development effort.

During a meeting with the Chief Justice Monday, the minister asked him to help the A-G's office to improve conditions in the prisons and ensure that the prisons were decongested.

Mr Dame said the A-G's Department was understaffed, with only a few State Attorneys.

That, he said, had contributed to the slow pace at which some cases had gone on in court.

“The department is inadequately staffed and we need funds to boost the number of personnel and equip them properly to meet the demands of their work because there is lack of computers and space, so some staff work from containers,” he said.

Mr Dame assured the Chief Justice that the A-G's office would begin recruitment of new staff and ensure that their conditions of service were attractive.

Mr Dame disclosed that after many years of delay, the A-G's office would soon relocate to a new office complex known as the Law House near the High Court Complex in Accra.

He said the Ministry of Finance had made provision for the completion of the project in the budget that was currently before Parliament.

He expressed the hope that the national arbitration centre would also be set up in the new office complex.

Mr Dame said the movement to the new buildings should give a completely new look to the Ministry of Justice.

Furthermore, he told the Chief Justice that the A-G's office would ensure proper collaboration among the various investigative bodies in the country, such as the Criminal Investigations Department of the Ghana Police Service and the Economic and Organised Crime Office (EOCO), to ensure prompt and efficient investigations into high-level criminal activities.

Mr Dame said the work of the A-G was cut out in the Constitution to be the chief legal advisor to the government, who was supposed to ensure that every opinion that emanated from the office was well scrutinised and was one that would meet the demands of the people.

“The A-G will ensure that agreements are not made in a way that will cause unnecessary loss to the state or burden the taxpayer, but that they are scrutinised to ensure that the state derives benefits from them,” he said.

The Chief Justice, for his part, promised to consider the suggestion put forward by the A-G, but also urged him to get his attorneys to speed up work when it came to prosecutions.

He assured the A-G of his commitment to help provide specialised courts for the prosecution of organised crimes.

He said the provision of more courts would also be prioritised to ensure the timely discharge of justice.

He encouraged the A-G to report inappropriate activities, such as the presentation of fake documents in criminal appeals.

“If a judge is not firm, the Judiciary must be alerted for action to be taken, so that we can see some improvement in justice delivery,” he said.

The Chief Justice also encouraged the A-G to ensure that government officials in the various ministries, departments and agencies operating under the government responded to requests of the A-G to help in the prosecution of cases or the scrutiny of agreements.

He urged the A-G to be firm to avoid the situation where he would be working hard without results.

He identified a problem with some lawyers from institutions such as the Lands Commission whose work often slowed down the prosecution of land cases, which affected the discharge of compensation to traditional landowners.

The Chief Justice said the partnership between the two institutions was not supposed to be limited to courtroom activities but every facet of the justice system that would help improve the system.

“Our partnership is not limited to court activities but even in the training of lawyers, so wherever the A-G is found, the Judicial Service must complement its work,” he said.

For her part, the Director of Public Prosecutions, Mrs Yvonne Atakora Obuobisa, said there was an urgent need to look at the work of jurors again to ensure that those who had stayed in some courts for years were changed.

He said some jurors had stayed in some courts for 14 years because the institution that appointed them kept appointing the same persons for jury work.

She appealed for the migration of case files onto an electronic platform to eliminate the presentation of fake documents for criminal appeals.