State, other stakeholders must collaborate on youth employment - Most Rev. Naameh 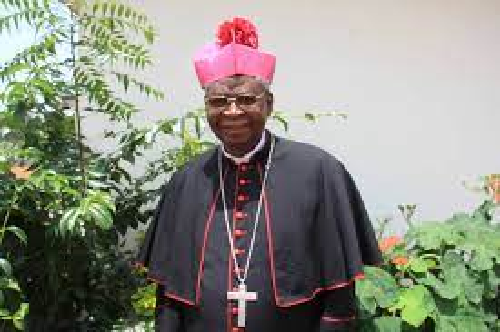 Most Reverend Philip Naameh, the Metropolitan Archbishop of Tamale, speaking at the Plenary Assembly of TEPPCON Follow @Graphicgh

The Metropolitan Archbishop of Tamale, Most Reverend Philip Naameh, has called for collaboration between the state and other stakeholders to tackle the problem of youth unemployment in the country.

We must all think outside the box and find lasting solutions to the problem of youth unemployment and its accompanying vices, which include the tendency for them to want to get rich quick," he stated.

He made the call at the 19th Biennial Plenary Assembly of the Tamale Ecclesiastical Province Pastoral Conference (TEPPCON) of the Catholic Church in Yendi.

It was on the theme "Fratelli Tutti and COVID-19; Challenges and prospects for effective evangelisation in Tamale Ecclesiastical Province".

The Plenary Assembly brought together representatives from the five catholic Dioceses in Northern Ghana, to discuss, share ideas and devise strategies to promote pastoral, socio-economic and the general well-being of residents in the Tamale Ecclesiastical Province.

Most Rev. Naameh said the youth constituted the greater segment of the country's population, yet were not really prioritised adequately enough in any sustainable development interventions by governments over the years.

He reiterated the need for Christians, Muslims and traditional authorities to join hands to fight against youth unemployment and vices such as corruption and same sex marriage.

The Bishop of Navrongo-Bolgatanga Catholic Diocese, Most Reverend Alfred Agyenta, who spoke on the theme, said the temporal closure of churches during the peak of COVID-19 in the country affected the lives of members, ministry of pastors and the running of churches.

"For some of our lay faithful, for whom Sunday Mass was the only means of practising their faith and source of spiritual lives, the closure of churches was a big blow," he stated.

He, however, said the situation also led to the discovery of the use of various opportunities in the new world of information.

Most Reverend Agyenta said the COVID-19 pandemic had helped the church to rediscover the creative way of using Information and Communications Technology (ICT) tools for evangelisation.

The Northern Regional Minister, Alhaji Shani Mhassan Shaibu, whose speech was read on his behalf, lauded the catholic Church for its contributions towards the socio-political and economic development of the northern part of the country.

He said the church had instituted programmes and interventions that had contributed to the development of Northern Ghana, including peace-building initiatives, capacity building on promoting participatory governance among others.

The Overlord of Dagbon, Ya-Na Abukari II, who was represented at the assembly, lauded the catholic church for its role in ensuring that sustainable peace continued to prevail in the Dagbon Traditional Area.