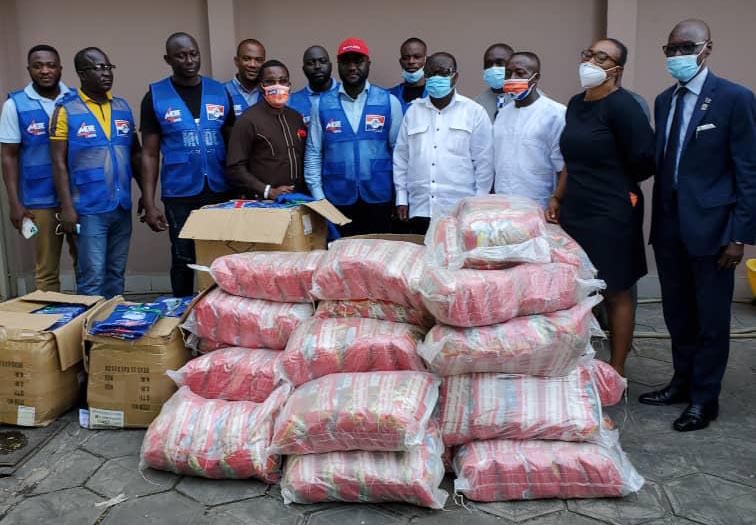 The love that the late former General Secretary of the New Patriotic Party (NPP), Mr. John Kwadwo Owusu Afriyie had for the party is being kept alive by his son, Yaw Amoateng Afriyie with a donation to the party for the December 7, 2020 election campaign.

Mr. Yaw Amoateng Afriyie on Monday handed over the items in support of the NPP's national campaign at the NPP headquarters in Accra.

The items he donated included 1,500 NPP-designed aprons and 165 bags of rice.

Apart from the donation towards the national campaign, Mr. Afriyie also offered 1,000 aprons and 100 bags of rice to his constituency, Kwabre East, in the Ashanti Region.

Mr. Afriyie’s donation was received by the National Chairman of the NPP, Mr. Freddy Blay, who commended the young man for keeping his father’s legacy alive.

Mr. Blay recounted how the late John Kwadwo Owusu Afriyie, who was popularly referred to as Sir John loved the NPP and worked hard towards the good of the party, adding that it was the best for his son to continue from where the father left off.

The NPP Chairman promised that the NPP was ready to offer the needed support to Mr. Afriyie, and urged him to offer his maximum contribution towards the growth of the party.

Mr. Afriyie, on his part, said that he was motivated by the good works of the Nana Addo Dankwa Akufo-Addo administration to be part of the campaign.

He said that he would endeavour to serve the NPP with zeal and enthusiasm just like his late father did until he exited the world.

He said that he was of the firm belief that the grassroots were the base of the NPP and thought it wise to donate the rice that would be used to motivate some polling station agents.

The soft-spoken Mr. Afriyie said that he would always be part of the NPP to work towards the party’s progress “because it is the only party with the interest of Ghana and Ghanaians at heart.”