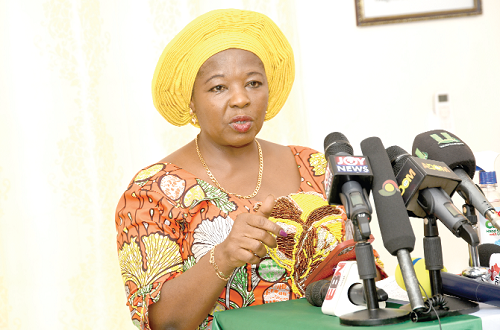 The Convention People’s Party (CPP) has described the sale of application forms for enlistment into the security services as unethical and tantamount to extortion.

It has, therefore, asked for such money to be refunded to the applicants.

It gave the security services up to September 21 to refund the money otherwise the party would, within the confines of the law, “make sure the right thing is done”.

Addressing the media in Accra yesterday, the Chairperson of the party, Nana Akosua Frimpomaa Sarpong-Kumankumah, explained that it was unethical for the security services to charge “jobless youth” only because of their desire to serve the state.

The sale of application forms, she said, had become a barrier for persons who were more qualified but were financially distressed.

“Looking at the current situation most private institutions have collapsed due to the pandemic. Most of the youth have become jobless as a result of that so asking them to pay this amount of money before the state can provide them jobs is unfair,” she said.

She noted that about 70 per cent of the National Gross Domestic Product (GDP) was being paid to the public sector so sale of job application forms was unnecessary.

“We will not be able to get patriotic citizens to serve the nation if we institutionalise corruption and the President must look into this,” Nana Sarpong-Kumankumah said.

“Embassies are taking money for visa application and we all speak against it but here is the situation whereby the state, which has to protect the welfare of its citizens, is taking money before it provides them jobs,” the chairperson said.

She stated that purchasing of the application form and joining long queues for interviews was a clear indication that the youth were ready to work.

For that reason, she said the government must make business startup loans available for the youth with proper supervision mechanisms.

That, she said, would reduce the over-dependence on the government for jobs and ensure that only qualified persons were recruited into the security service.