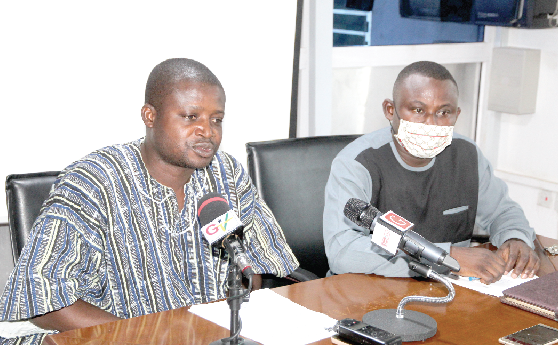 The National Association of Local Authorities of Ghana (NALAG) has called for a review of Article 244 (2) of the 1992 Constitution to allow for the election of presiding members for district assemblies by simple majority.

According to the association, the current nature of the law, which requires a nominee to attain two-thirds of the votes of the membership of the entire assembly, undermined the election process and made it difficult for nominees to meet the requirement.

Addressing the media at a press conference in Accra yesterday, the President of NALAG, Mr. Bismark Basie Nkum, said many assemblies had failed to elect presiding members for close to two years due to "the strict nature of the law."

“Article 244 (2) requires that less more than two-thirds of the membership of the entire assembly should be able to elect a presiding member.

This means that even if one member does not attend the meeting, his absence is factored in the calculation, so we are appealing that in the same manner that the Speaker of Parliament is elected by simple majority, same should be replicated in the assemblies in the interest of building effective local governance structure," Mr. Nkum, who is also the District Chief Executive for Gomoa West, said.

Article 244 (1) of the 1992 Constutition states that “The District Assembly shall have a Presiding Member who shall be elected by the assembly from among its members.”

Article 244 (2) of the Constitution further directs that “The Presiding Member shall be elected by at least two-thirds majority of all the members of the Assembly.”

Under the law, the presiding member, who has a tenure of two years and is eligible for re-election, presides over the meetings of the Assembly among other functions prescribed by law.

The Nabdam District Assembly for instance failed to elect a presiding member after three consecutive attempts since it was inaugurated earlier last year as all the elections ended in stalemate.

Similarly, the Agona West Municipal Assembly, which was inaugurated in January 2020, as of September 2020, had equally failed to elect a presiding member on three different occasions.

Mr. Nkum also called on Parliament to revisit the Bill that sought to amend Article 243(1) and Article 55(3) of the Constitution to pave the way for the election of metropolitan municipal and district chief executives (MDDCEs).

The government in 2019 withdrew the Bill from Parliament and subsequently cancelled a scheduled referendum due to the lack of consensus to prosecute the agenda.

Mr. Nkum said the democratisation of local governance was the surest way to promote development at the local level, so the issue should not be put to bed.

"Local government democracy is the way to go. That is what is happening all around us and even countries that copied our local government system are electing their mayors. We are calling on Parliament to assess the issue again. We should ignite the discussion again and follow the necessary procedure and get the Constitution amended," he said.

He also appealed to Members of Parliament to attend assembly meetings and share with the assemblies policies and programmes that would enhance the activities of assembly members.