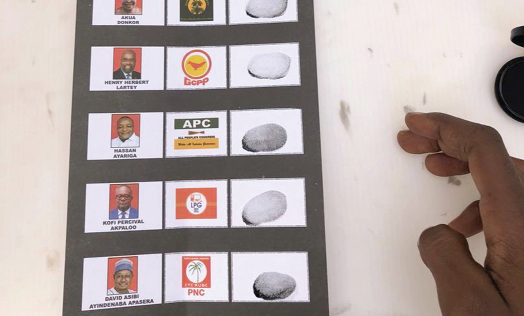 In spite of the widespread public education on how to cast ballots, rejected ballots almost doubled from 167,349 in the general election of 2016 to 313,397 in the 2020 elections.

The Electoral Commission (EC) defines rejected ballot as “a ballot paper which is handled by the voter in such a way that the choice of candidate or the voter’s intention cannot be ascertained as such”.

It says such a ballot is always found in the ballot box.

As part of measures to reduce rejected ballots in the December 7, 2020 general election, the EC improved the design of the ballot paper, increasing the size of the black border lines separating the spaces where thumbprinting should be done on the ballot paper.

The spaces were larger and the black lines between candidates’ pictures, symbols and the thumbprints were thicker, all in a bid to help minimise the incidence of thumbprints straying from one space into another, leading to the rejection of the ballot.

However, that did not help much, as rejected ballots again ‘placed’ third, accounting for 2.33 per cent of verified voters.

That was more than the total one per cent votes obtained by nine presidential candidates other than President Nana Addo Dankwa Akufo-Addo, Mr John Dramani Mahama and Rev. Christian Andrews.

In spite of the COVID-19 pandemic, the elections were fiercely contested, recording a turnout of over 13 million people or nearly 80 per cent of registered voters.

President Akufo-Addo of the New Patriotic Party (NPP), who was declared winner of the presidential election, polled 51.59 per cent of valid votes cast, while Mr Mahama of the National Democratic Congress (NDC) polled 47.36 per cent to place second.

A look at the phenomenon of rejected ballots shows that it is on the ascendancy and could work against the wishes of the people during elections and ultimately hinder the consolidation of democracy in the country.

In the 2008 presidential election, for instance, the number of rejected ballots recorded in the first round was significantly higher than ever, both in terms of figures and percentages.

Commenting on the development, a Senior Research Fellow and Head of Advocacy and Institutional Relations of the Institute of Democratic Governance (IDEG), Mr Kwesi Jonah, said one of the reasons for the high incidence of rejected ballots was the tall list of presidential candidates on the ballot paper.

“In the 2008 run-off, which had only two candidates, the recorded number of rejected ballots was almost insignificant. So for me, it is the tall list of candidates on the ballot paper that confuses voters,” he said.

Mr Jonah proposed to the Electoral Commission (EC) to raise the filling fee for presidential candidates to limit the number of contestants in a bid to curb the high incidence of rejected ballots.

He stressed the need for the EC and the National Commission for Civic Education (NCCE) to intensify education on the proper way of voting in the constituencies that normally recorded a high number of rejected ballots because of the low level of literacy there.

bA Political Scientist and Lecturer at the University of Ghana, Professor Ransford Gyampo, who has done some extensive research on rejected ballots, said the development was as a result of lack of education and awareness and protest votes.

“It is a protest against partisan politics in general and so some people thumbprint in such a manner that makes it difficult for officials to determine the choice being made,” he said.

Some voters who interacted with the Daily Graphic revealed that they intentionally spoilt their ballots in protest against voting for any of the candidates and dropped them in the ballot boxes.