Rawlings not disloyal to NDC — Amissah-Arthur 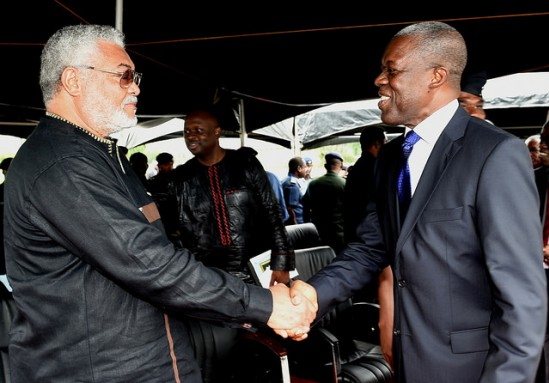 Mr Rawlings' continued criticisms of the party and the past administrations of Prof. John Evans Atta Mills and John Dramani Mahama, as well as his closeness to President Nana Addo Dankwa Akufo-Addo, have not sat well with a section of NDC members who feel the founder of the NDC has demonstrated disloyalty to the party.

Speaking to journalists in Accra last Thursday, the former vice-president said Mr Rawlings had always had his views on issues.

“Mr Rawlings is a non-conformist; he believes in such things that he’ll speak his mind whether you like it or not. He will say it and let the chips fall where they may. We in the NDC appreciate it so much and we don’t think he’s being disloyal,” the former vice-president said.

He added: "Even when he was President, he would always take his own appointees on even at rallies, so I like it because you always know where he stands."

Mr Amissah-Arthur argued that Mr Rawlings attending national events under the current administration should not be misconstrued as romancing with the Akufo-Addo-led government.

"He is a former President and so long as he lives he is our property; so when he attends national events, I think it is not because he is romancing with the New Patriotic Party (NPP)."

On the healing process within the NDC, the former vice-president said it was part of the recommendations of the Kwesi Botchwey Committee report.

That had resulted in the re-registration of party members across the country, an exercise he said was crucial in efforts to win back power in 2020.

Mr Amissah-Arthur, who has been visiting some of the registration centres since the exercise started, said the enthusiasm was very high, but he indicated that there were few challenges particularly with inadequate registration materials

"Going round, I have seen that we didn't foresee the large numbers of NDC members who would want to register," he explained.

On the NDC Unity Walk, the former vice-president said it was not part of the recommendations of the Dr Botchwey Committee.

Since the walk started, he had taken part in only one of them but he said that did not mean he was against it. He explained that his absence could have been that the walks coincided with other pressing personal issues.

He stated that the walk itself was supposed to be a local event.

Mr Amissah-Arthur said the large participation of party members at the unity walk was a testament to the fact that the NDC was not finished as some believed. Rather, the party was still a force to reckon with.