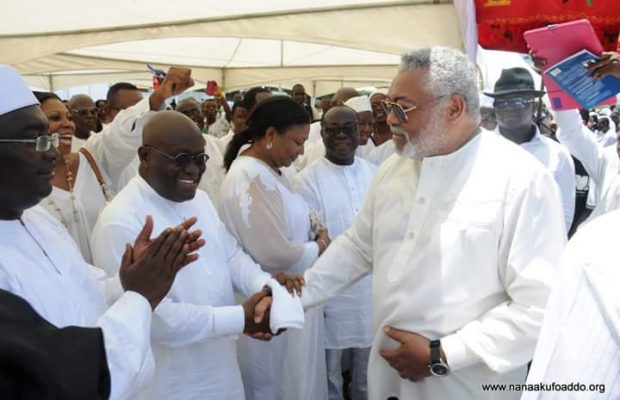 According to him, it would be difficult for anybody to tag the New Patriotic Party’s (NPP) flagbearer with corruption because “[he] is not known for messing around with material things.”

Mr Rawlings made this admission in an interview with the Guardian newspaper of Nigeria on a range of issues, including Nigeria under President Muhammadu Buhari, corruption in Africa, Ghana, and the way forward for African countries.

His comment comes in the wake of President Mahama’s receipt of a Ford Expedition as a gift from a Burkinabe contractor, Djibril Kanazoe, who was later awarded a government contract.

Mr Rawlings criticised state institutions for allowing corruption to infiltrate their moral fibre, adding that it could affect the fortunes of the party he formed (NDC) at the upcoming polls.

According to him, the level of corruption that had engulfed the country was the reason his wife, Nana Konadu Agyeman-Rawlings left the NDC to form her own party, the National Democratic Party (NDP).

In his words, Mr Rawlings said, “I find myself in a situation where I have moral responsibility and no executive authority. I would have wished that my moral authority could have the same influence. But that is not the case, corruption has infiltrated our institutions and their leaders so badly today that they use some kind of lens to demonstrate that you can keep your moral authority, but this is executive power at work.”

“So all I can do is to critique and advocate for my people. I can’t hide it. And I believe that was how I won the respect from the larger populace, from both sides of the political divide. I have remained principled. My wife is still standing where she is, cut off from our party that she was very responsible in building up because it became corrupted from Mills’ time,” he bemoaned.

“We now fight on the terms of the opposition or the main opposition party. Fortunately for them, they have a leader who is not known for messing around with material things. The situation is so bad. So unfortunate!” he noted.