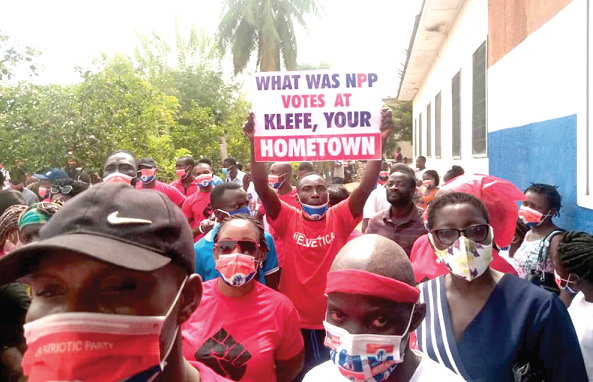 • Some protesters at the NPP Volta Regional office Follow @Graphicgh

Some members of the New Patriotic Party (NPP) in the Volta Region who call themselves Volta NPP Grassroots For Justice, together with regional and constituency party executive members, have embarked on a massive demonstration to register their displeasure over the re-appointment of Dr Archibald Yao Letsa as the Volta Regional Minister.

The demonstration, dubbed "Enough is enough," saw hundreds of protesters take to the streets of Ho, where they called on the President to rescind his decision and provide the region with a minister who would be accepted by all.

According to the group, they could no longer work with Dr Letsa.

The Spokesperson for the group, Mr Gladstone Azorko, who presented a petition to President Nana Addo Dankwa Akufo-Addo through the NPP regional chairman, said the party had retrogressed under the four years of Dr Letsa as a regional minister hence their rejection of his re-nomination.

He said the regional minister had not been supportive of the activities of the party and had also performed abysmally as a minister and, therefore, did not deserve a second term.

Mr Azorko said the party had always been in debt during President Akufo-Addo's visit to the Volta Region on a tour as transport fares for supporters, bills for public address systems, food and refreshment for guests remained unpaid, a situation he described as 'disheartening and disgraceful'.

"We can state on authority through our trusted sources that the region owes about GH¢60,000 as it stands, because our fact checks from his constituency, the Ho Central Constituency, did not give us any positive feedback," he said.

He said Dr Letsa failed to improve the fortunes of the party because he was unable to unite the party and bridge the gap between the party in the region and the Regional Coordinating Council during his tenure.

“His tenure in office over the past four years has left the Volta Region NPP members ‘demoralised, hopeless, to say the least," he stated.

Mr Azorko, therefore, called on President Akufo-Addo to appoint a person who could lead in a difficult region as Volta Region while assuring teeming party supporters that the group would relentlessly continue to protect the unity of the party and fight for the forward march of the party for the benefit of the grassroots.