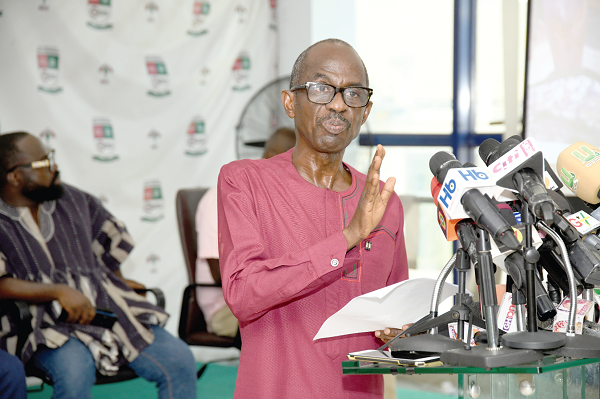 The National Democratic Congress (NDC) says it has accepted the Electoral Commission (EC’s) call for the police to comprehensively investigate the claims by former President John Mahama that some one million ballot papers were printed in favour of President Nana Addo Dankwa Akufo-Addo during the December 7, 2020 elections.

The party said apart from accepting the challenge by the EC, it would go a step ahead to provide evidence of the printing of additional one million ballot papers to the police.

The EC had, at its ‘Let the Citizen Know Series,’ held in Accra last Monday, called on the police to investigate claims made by former President Mahama that one million ballot papers were thumb-printed in favour of President Akufo-Addo in the 2020 elections.

Among other things, the EC also distanced itself from allegations about the use of the military to influence electoral outcomes.

However, at a press conference held in Accra yesterday the General Secretary of the NDC, Mr Johnson Asiedu Nketiah, said former President Mahama did not make any claim that the one million ballot papers were thumb-printed in favour of President Akufo-Addo.

"John Mahama never made such claims. What he said was that the NDC discovered about one million extra ballot papers that were printed without the knowledge of the party's agents.

"The NDC stands ever prepared to assist in any credible investigation into this case," he stressed.

He pointed out that the police already had evidence of the over one million ballot papers that were discovered at Innolink, the company which printed the ballot papers.

"On the issue of printing of one million excess ballot papers and arrest of persons in possession of the printed ballot papers, the Ghana Police Service carried out the arrest and, therefore, should be providing update on the status of the investigation," he said.

Mr Nketiah also called on the Inspector General of Police (IGP) to start investigation into what he described as "the extra judicial killings" that characterised the 2020 elections.

"Let the new IGP show the same commitment in bringing errant members of the society to book over misdemeanours on the more serious crimes of extra judicial killings," he stressed.

He said although the EC had tried to distance itself from the deaths associated with the 2020 elections on grounds that it was not in charge of security issues, the Commission was complicit in the killings because Presiding Officers and Returning Officers of the EC were in charge of all activities at the polling station and collation centres respectively.

Responding to the claim by the EC that it had saved the country $90 million through prudent expenditure during the entire electoral process, he said that was untrue because available evidence pointed to the contrary.

"A report by IMANI Africa, a policy think tank, for instance, showed that $150 million was lost as a result of EC's bad procurement process. It was described as opaque and non-transparent," he said.

Mr Nketiah urged the EC to take steps to address integrity issues that had caused members of the public to lose confidence in the election management body.

He said the NDC remained committed to processes that would bring reforms to the country’s electoral system.