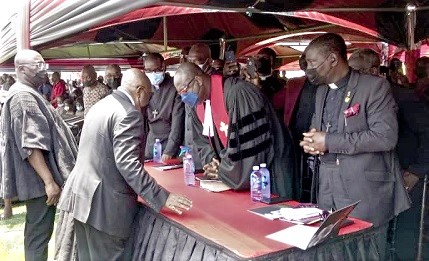 Ishmael Ashitey, who passed on January 7, 2022, was buried on Monday at Tema Manhean after a burial service graced by the President; the Vice-President, Dr Mahamudu Bawumia; the National Chairman of the New Patriotic Party (NPP), Mr Freddie Blay; a former Speaker of Parliament, Prof. Aaron Mike Oquaye, and other top government officials.

The late Ashitey was a three-time NPP MP for Tema East in the second, third and fourth Parliaments of the Fourth Republic.

He also held various positions such as Minister of State in charge of Fisheries and Deputy Minister of Trade and Industry from 2001 to 2004.

From 2017 to 2021, he served as the Greater Accra Regional Minister under the leadership of President Akufo-Addo.

The NPP, in a tribute, noted that "throughout his many years in public life, never was he plagued with any scandal. Ashitey, as he was famously known, was such an outstanding member of the Ghanaian society who touched and inspired many lives," the NPP said.

For her part, the widow, Mrs Margaret Ashitey, said her husband had the real desire to positively influence his community.

In memory of the late Ashitey, the family announced the establishment of the Ishmael Ashitey Education Endowment Fund to support the training of five brilliant needy students each year.

They also announced a foundation to offer vocational training grants to applicants enrolled in technical skills training programmes for the youth of Tema East Constituency.

In a sermon, the Chairman of the Ga Presbytery of the Presbyterian Church of Ghana (PCG), Rev. Dr Abraham Nana Opare Kwakye, urged all to strive for excellence in all they did so that when "our time comes, the Lord will say to us, well done, good and faithful servant".

The Presidency donated GH¢100,000 to the children and family of the late NPP stalwart with the directive that two-thirds of the amount should go to the children while the remaining is given to the family.