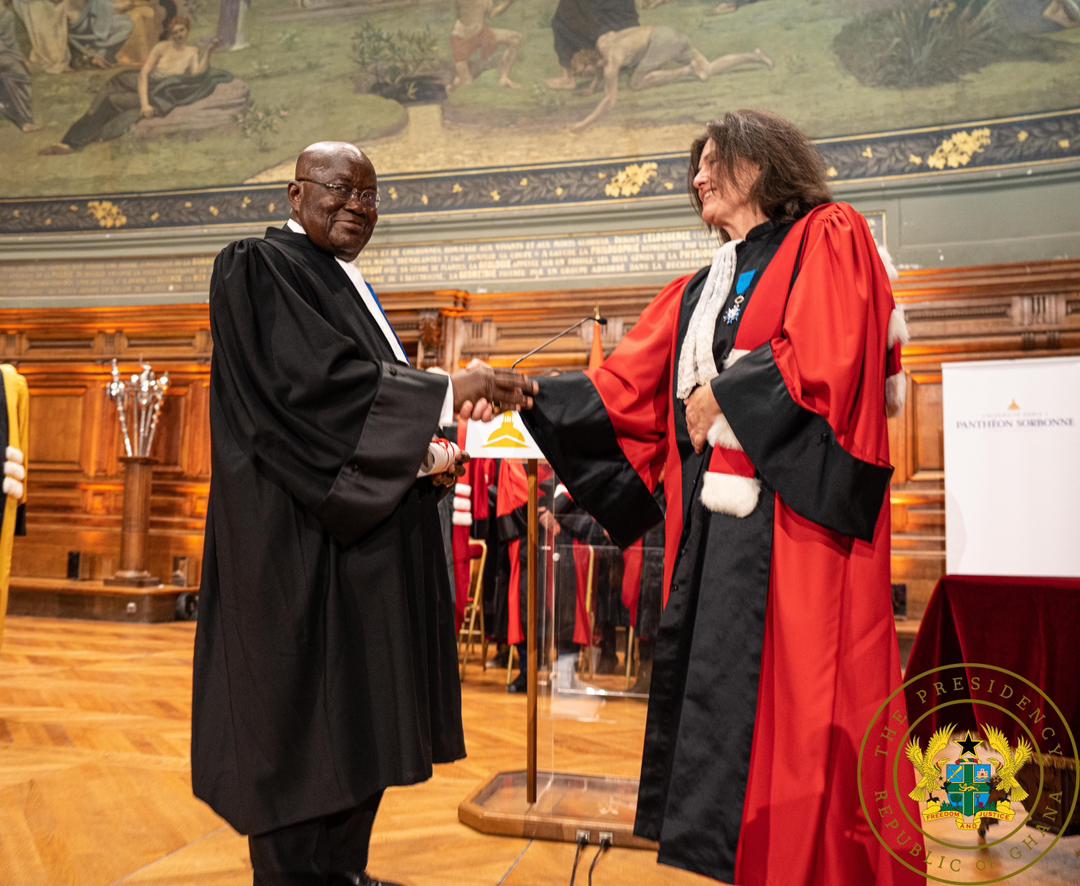 President Nana Addo Dankwa Akufo-Addo was on Monday presented with an honorary doctorate degree from the University of Sorbonne, in Paris, France, one of the most prestigious universities in Europe and the world.

Sorbonne University conferred the award on President Akufo-Addo, in recognition of his commitment to entrenching the values of democracy in Ghana, fostering peace within the West African Region, guaranteeing access to a minimum of senior high school education for all of Ghana’s children through the implementation of the Free SHS policy, and also for the leadership shown in the fight against COVID-19, amongst others. 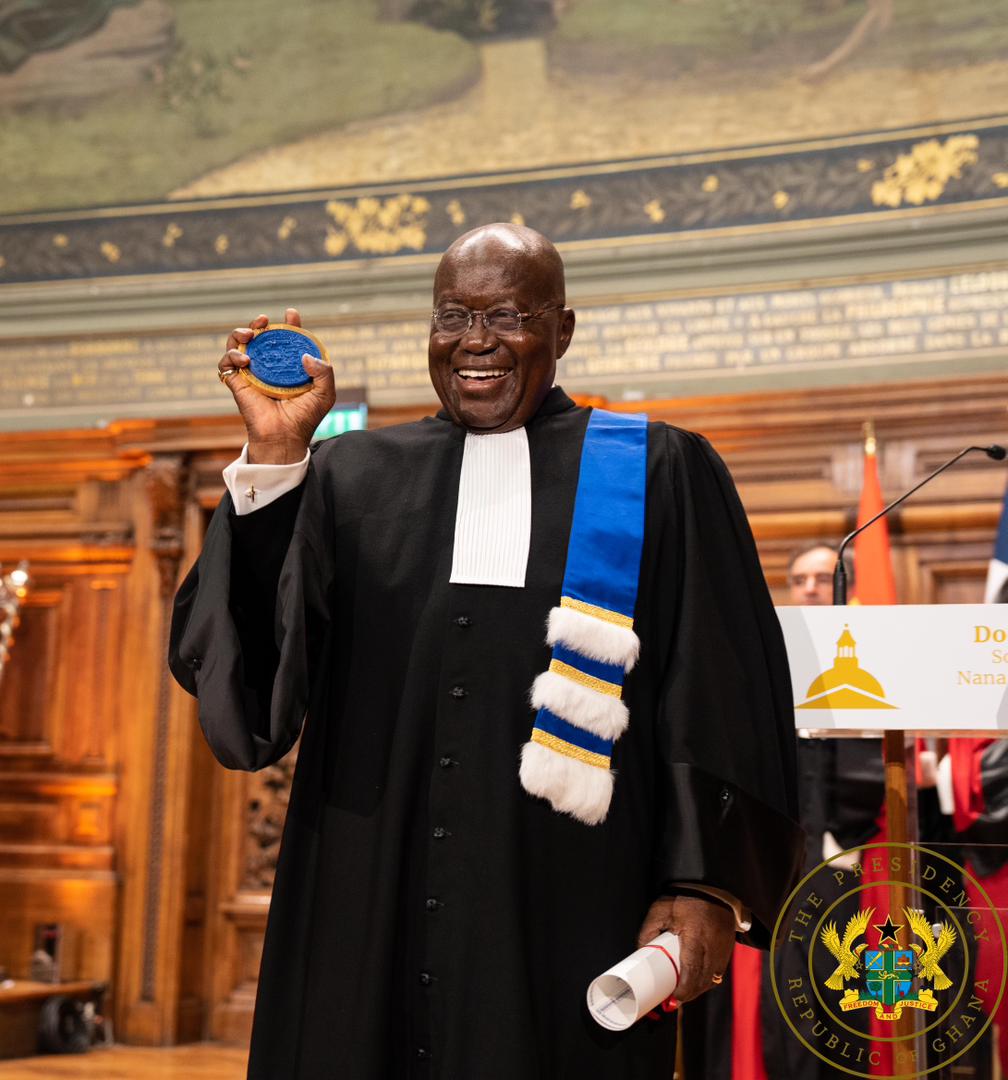 Receiving the honour on Monday (October 10, 2022), the President was delighted to be in the company of Pablo Picasso, Kofi Annan, Amartya Sen and Nelson Mandela, as persons who have also received Honorary Doctorate Degrees from Sorbonne University.

In his acceptance speech, he addressed issues on climate change, equity and justice, reform of the multilateral system and the importance of strengthening international co-operation amongst nations.


On climate change, President Akufo-Addo recounted events at the just ended Summit for financing Africa's adaptation to climate change in Rotterdam, in the Netherlands, and noted that Africa contributes only 4% to the global production of greenhouse gas emissions, but it is the region of the world where the consequences of these are felt most heavily.

He explained that the Adaptation Summit's mission, ahead of the Conference of the Parties in Egypt, was to mobilize twenty-five billion dollars by 2025 to mitigate the consequences of climate change in terms of food security, resilient infrastructure, creation of suitable jobs and green finance. 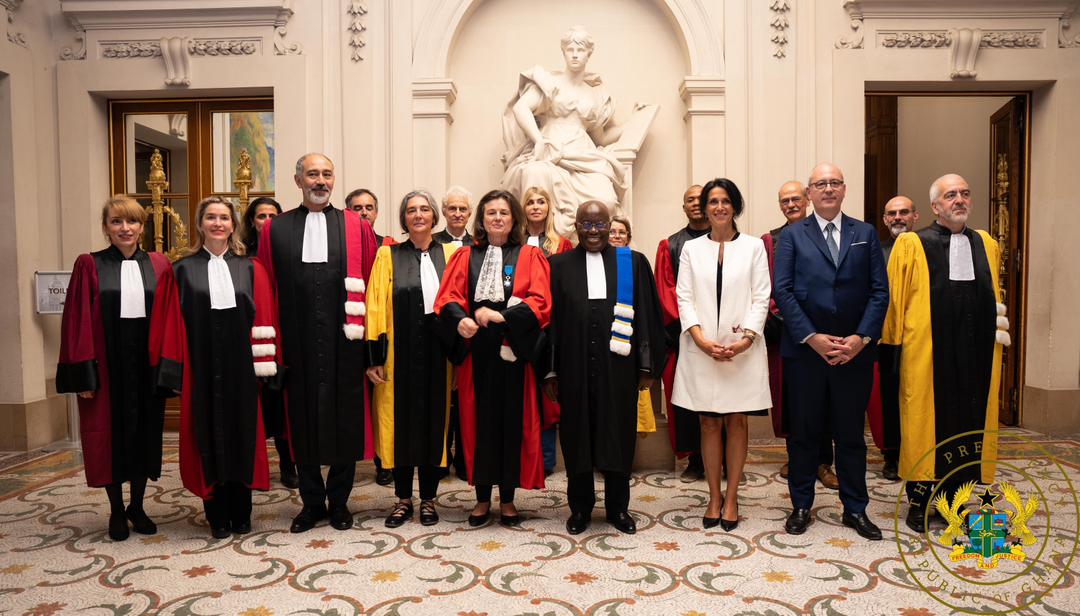 With Africa’s 1.3 billion inhabitants representing nearly eighteen percent (18%) of the world's population, he told the gathering that this population will balloon to some 2.5 billion by 2050.

“It is on the African continent that the future of the world will largely be played, in any case the future of Europe and that of France. These are not words. These are facts. And, as you say in French, facts are stubborn. Twenty-five billion in three years, for adaptation to climate change for the whole of Africa. This is about five times the annual cost of medical transport in France. That is a lot, of course. But that is derisory,” he bemoaned.

As paltry as it was, and with G20 countries responsible for 80% of emissions, President Akufo-Addo stated that Africa left Rotterdam with pledges of $55 million, outside of the pledge of the African Development Bank to mobilize 12.5 billion United States dollars.

“You heard it right. I am talking about millions. 55 millions for 54 countries, that makes an almost round count. 1 million each. One would have hoped that the international community would have shown greater solidarity with the African continent, which is suffering the consequences of problems that she did not create. This is not right. This is not fair,” President Akufo-Addo stated. 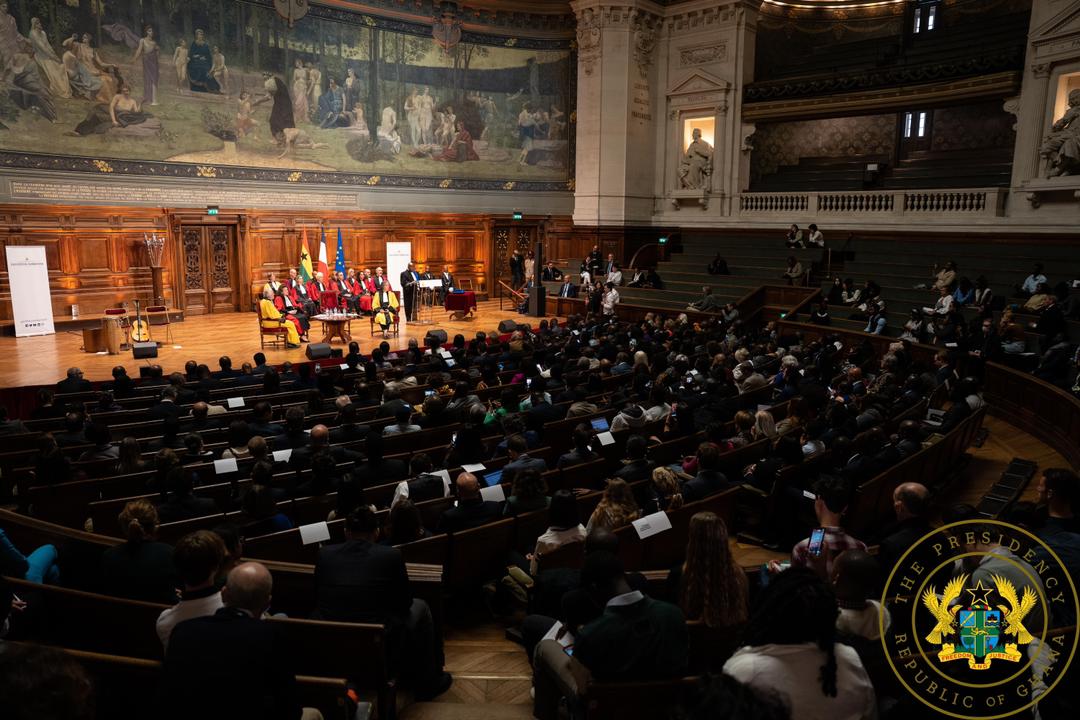 To this end, the President told the gathering that African leaders have a duty to build, together with their respective populations, fairer societies, where women and children, but also the most fragile, are treated appropriately.

According to him, “Societies where everyone, whatever their incomes, beliefs or ethnic origins, can have equitable and guaranteed access to the goods essential to the development of every individual and of society as a whole: access to water, food and quality care, access to energy, access to education, access, in short, to the decent life to which every free being can and must aspire.”

From this point of view, the President was proud that, under his tenure of office, “Ghana has implemented a policy of free public high schools during my first mandate. It is a symbol for us of the central place that education must hold in the development of societies and the training of enlightened citizens able to play their full role.”

Calling for a reform of the multilateral system, which, he said, “is leaking from all sides”, President Akufo-Addo noted that the world of 2022 is not the world of 1945.

“The crisis of the multilateral financial institutions and the United Nations system, which were born from the rubble of the Second World War, is a deep crisis. It will continue until a fair system is put in place; a system that reflects the new balances, no longer based on who lost or won the Second World War, but on the major contemporary and future balances,” he stated. 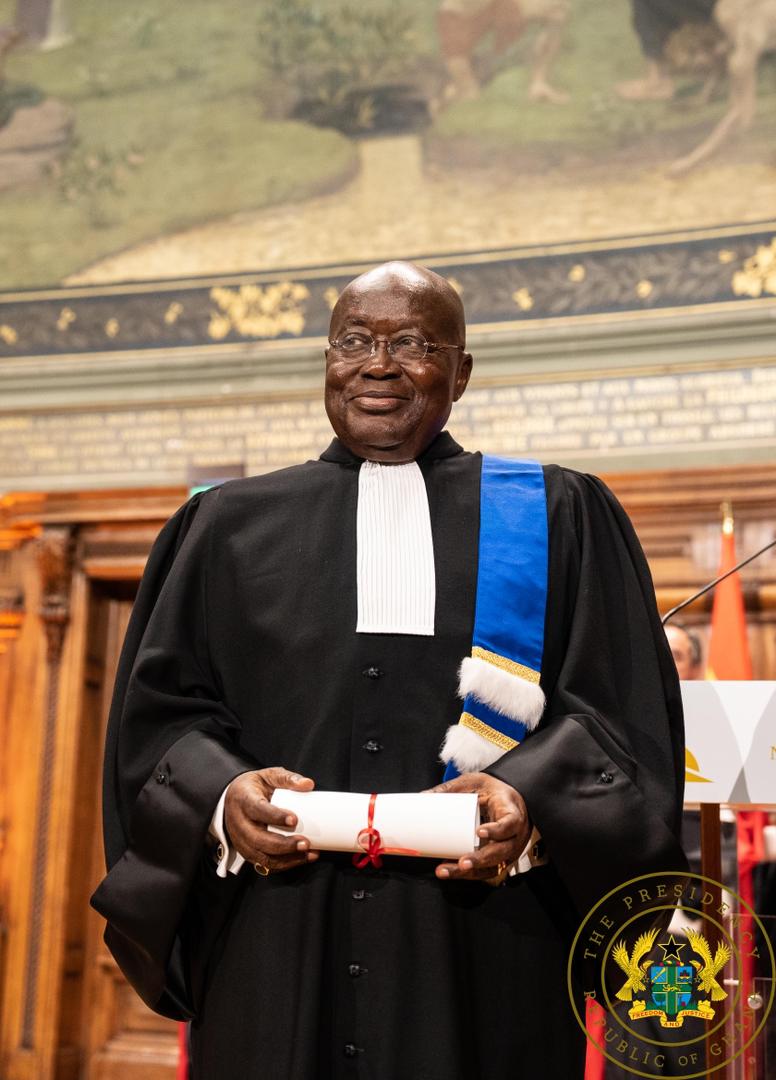 Reiterating Ghana’s position as a beacon of democracy and stability in contemporary Africa, President Akufo-Addo condemned the unacceptable aggression of Ukraine by Russia, which is leading the world to the edge of the precipice and has dramatic consequences on the African economies and populations.

“Ghana, the first country in sub-Saharan Africa to gain her independence and to free herself from the colonial yoke, in her case the British yoke, has always defended a vision of the world free of hegemonic practices, in which all nations, large or small, co-exist peacefully, in fairness and with mutual respect, a vision that insists that disputes between countries are settled through dialogue and negotiation, and not by force and violence,” he added.