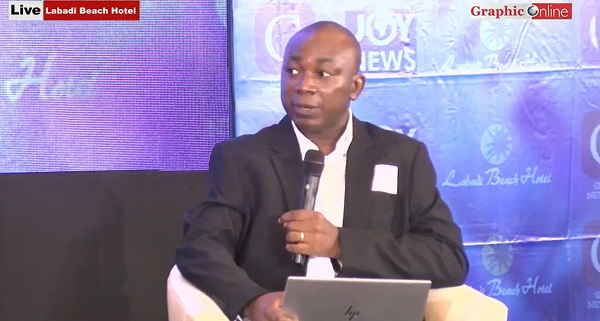 An economist, Professor Godfred Bokpin, has urged President Nana Addo Dankwa Akufo-Addo to cut the number of Ministers in his administration to 40.

According to him the number of Ministers, coupled with other costs of operationalizing Ghana's democracy such as maintaining 275 Members of Parliament and other Presidential appointees was too expensive for the country in the current economic crisis.

He said the cost of operationalizing Ghana's democracy since 1992 had left little room for growth-enhancing spending and investment.

"If you look at the size of government, the number of Ministers and Ministries, if you were running Ghana as a business, you would certainly have sacked some Ministers by now, collapsed some of the Ministries, reduced government appointees and associated costs of running it, doing so will not hurt growth, doing so would only free-up fiscal space for growth-enhancing spending," Professor Bokpin said.

"I think that Ghana should be able to do with less than 40 Ministers, I am looking forward to the President taking that decision in the 2023 budget and then we can document the cost savings from there directly.

"Ghana's economy is not particularly unique. Cote d'Ivoire in April 2022 took the decision to reduce the number of Ministers from 41 to 42... We supported the President when in his first term when he said size matters with the number of Ministers but I believe that after four years there should be proper feedback because it's (maintaining 86 Ministers) still costly.".


Professor Bokpin made this known today in his address at the Graphic Business/Stanbic Bank Breakfast Meeting in Accra. The meeting was on the theme: “17 Times too many! What should we stop doing and start doing as a people’’?

He also disagreed with an assurance by President Akufo-Addo that there will be "no haircuts" on investments. Prof Bokpin explained that haircuts were unavoidable but the focus should be on areas that will not hurt growth.

"As far as we are concerned, a haircut is unavoidable, the question is, on whose head should it be?," Prof Bokpin said.

"Should it be on the head of government largely? That's why we are talking about the President taking the bold step to downsize and the signal effect will be real".

He said cuts on salaries would not help the situation as announcements of reductions in the salaries of appointees in the past had not impacted the markets.