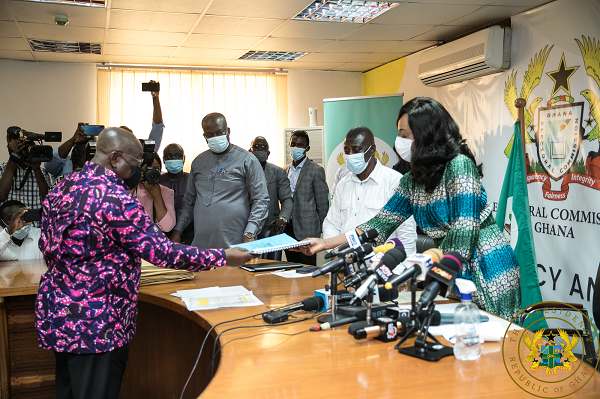 Moments after filing his nomination to contest the presidential election on Tuesday, President Nana Addo Dankwa Akufo-Addo charged the Electoral Commission (EC) to deliver a free and fair election on December 7, this year.

“Elections are not meant to be decided by you, or the officials that work here. You are the referees of the contest,” he told the EC.

President Akufo-Addo, who is seeking re-election on the ticket of the New Patriotic Party (NPP), declared: “I am not interested in any crooked results and I do not want to be a President elected by deceit.”

The filling of nomination forms by presidential and parliamentary aspirants was officially opened by the EC last Monday October 5 to run for five days.

No aspirant showed up on the first day of the exercise, but the second day witnessed intense activity; apart from President Akufo-Addo, two others, an independent presidential aspirant, Mr Alfred Kwame Asiedu Walker, and the flag bearer of the Ghana Union Movement (GUM), Rev. Christian Kwabena Andrew. also presented their nomination forms.

Presidential Akufo-Addo who unseated the incumbent John Dramani Mahama in a historic victory in the 2016 election, said it was refreshing that the EC had given considerable confidence to majority of Ghanaians ahead of the polls.

“In you [ EC] and the leadership of our country, there are people who are committed to a free, fair, credible and transparent process. We hope that will mark the conduct of the elections on December 7,” he said.

In the company of his running mate, Dr Mahamudu Bawumia, and some leading members of the NPP and the government, the President, sporting an African print long-sleeved shirt over a black pair of trousers, said: “If, indeed, by the grace of God Almighty, I am again the choice of the Ghanaian people, it will be one that will be freely and openly demonstrated.”

He presented to the Chairperson of the EC, Mrs Jean Mensa, who is the Returning Officer of the December 7 presidential election, his filing fee of GH¢100,000 and other relevant documents and declarations.

He said Ghanaians were counting on the EC to be the arbiter that would hold the scales evenly to all contestants.

As early as 8 a.m. yesterday, scores of NPP supporters, holding placards indicating the campaign messages, achievements and manifesto promises of the party, stood around the premises of the EC.

There was heavy security presence on the premises of the EC.

At the conference room of the EC, known as the IPAC Room, where the forms were received, a large number of reporters had occupied almost half the room, awaiting the arrival of the President.

About 11a.m., President Akufo-Addo, in the company of Dr Bawumia, who also wore a white smock, entered the IPAC Room.

The President requested the EC officials to ensure that they completed the vetting of the documents yesterday, so that his two supporters who would append their signatures to the documents could also complete the process.

He explained that he would be out of the Greater Accra Region for about a week and, therefore, wanted the process to be carried through with dispatch.

Government and NPP officials who were in the IPAC Room included the Chief of Staff at the Presidency, Mrs Frema Osei Opare; the Finance Minister, Mr Ken Ofori-Atta; the National Chairman of the NPP, Mr Freddie Blay; the General Secretary, John Boadu; the National Organiser, Mr Sammy Awuku, and the NPP Campaign Manager, Mr Peter Mac-Manu.

Welcoming the NPP team, Mrs Mensa made reference to the Bible, saying: “This is the day the Lord has made and we will rejoice and be glad in it.”

She said without the filing of nominations, the EC could not run the polls.

To ensure a transparent and accountable process, she said, the EC had developed a check list that would be used by two teams of officials to check aspirants’ and review them.

The first team, she explained, was the technical team which would ensure that the presidential aspirants met the criteria as set out in the law, namely: aspirants must be at least 40 years of age, all tax obligations cleared and they have running mates.

She said the second team was the Information Technology (IT) team charged with the responsibility of scrutinising all the voter identification of the aspirants and their supporters to verify whether they were, indeed, registered voters.

Later speaking to the media, Mrs Mensa assured political parties and presidential aspirants that the EC would ensure a fair assessment of the nomination forms that would be submitted to guarantee the credibility of the electoral process.

She said to ensure a transparent, credible, fair and accountable process, the commission had developed a detailed checklist that embodied the criteria to be satisfied by the presidential aspirants, as prescribed by law.

“The template will guide the scoring and awarding of marks by teams established by the commission to scrutinise and review each of the nomination forms submitted,” she said.

Additionally, she said, “we are confident that the five-day period provided for the filing process, as opposed to the two days provided in the previous nomination process, will allow enough time for presidential aspirants to correct any errors identified in their forms”.

The nomination forms must contain important personal details about aspirants which will enable the EC to satisfy itself that they meet the qualifying criteria under the laws of the country.

To qualify to contest for the Presidency, a person must be a citizen of Ghana by birth, a registered voter, be at least 40 years and qualified to contest election to Parliament.

The aspirant must have paid all relevant taxes or made satisfactory arrangements with the Ghana Revenue Authority (GRA) to pay such taxes.

However, in spite of meeting such a criteria, a person cannot be a presidential candidate if he/she, among other things, owes allegiance to a country other than Ghana or has been adjudged or otherwise declared bankrupt under any law in force in Ghana and has not been discharged, or is of unsound mind, or had been detained as a criminal lunatic under any law in force in Ghana, or had been convicted for treason or for an offence involving the security of the state, fraud, dishonesty or moral turpitude.

In addition, an aspirant is required to swear to a statutory declaration attesting to his or her eligibility to stand for office and the accuracy of the details provided in the nomination forms.

Consequently, false statements made in the nomination forms have legal consequences.

Additionally, there must be four pictures, in accordance with the dimensions and specifications in the law, and the payment of a filing fee, as determined by the EC.

On submission of the forms by aspirants, the EC is obliged under law to check that the facts provided on them are correct, and that the forms have been properly signed by the required number of registered voters.

The flag bearer of GUM, Rev. Andrew, who submitted his nomination forms in the company of his running mate, Alhaji Abu Grant Lukeman, around 3:30 p.m. yesterday, encouraged the EC to be firm and conduct the electoral process in accordance with the law.

Meanwhile, Madam Akua Donkor was seen at the EC Head Office a few minutes after 4 p.m. but she did not submit her nomination forms, as had been envisaged.