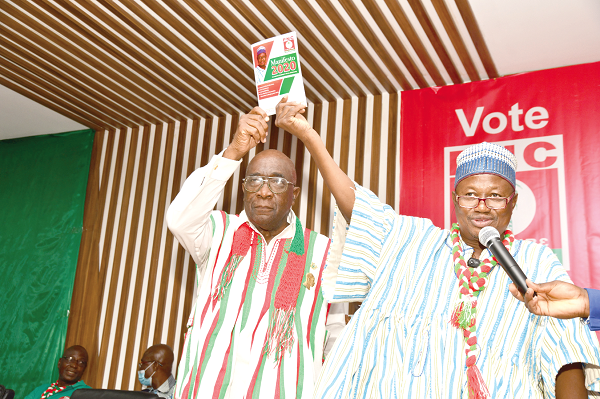 The presidential candidate of the People's National Convention (PNC), Mr David Asibi Apasera, has said the party will deliver prosperity to all Ghanaians if voted into power.

According to him, a government of the PNC would provide job opportunities, free education from kindergarten to the tertiary level, free health care, affordable housing and an insurance scheme for farmers.

Mr Apasera said this at the launch of the party's manifesto in Accra yesterday.

The event was also used to launch the party's 2020 national campaign, introduce the running mate of the presidential candidate, Pastor Dr Divine Ayivor, and parliamentary candidates.

It was Mr Apasera’s belief that the manifesto would not only serve an electoral purpose but also stimulate a comprehensive road map towards building immediate, medium and long-term objectives for delivering prosperity for all Ghanaians.

A PNC government, he said, would re-align the national healthcare policy to focus on preventive health care targeted at increasing life expectancy.

“The PNC in government will increase public funding of healthcare delivery from 3.3 to 8.5 per cent of Gross Domestic Product (GDP) and progressively towards the 15 per cent target of the 2001 Abuja Declaration on health,” he said.

The presidential candidate gave an assurance that a government of the PNC would set up a GH¢500 million pharmaceutical industry fund to provide capital support for research and development in pharmacology and the manufacturing of medicines.

Moreover, he said, it would build 100 polyclinics in district capitals outside the urban centres to ensure the equitable distribution of healthcare facilities.

Four more psychiatric hospitals, he said, would be built in Kumasi, Tamale, Techiman and Wa to add to the current three in Accra, Pantang and Ankaful.

“The PNC will build six additional state-of-the-art hospitals for the security agencies in the first two years of its administration. One for the Customs Division of the Ghana Revenue Authority will be located at Kpetoe in the Volta Region, an Immigration Hospital in Assin Fosu, a Military Hospital in Tamale, a Police Hospital in Bolgatanga, a Fire Service Hospital in Sunyani and a Prisons Hospital in Nsawam,” he said.

Mr Apasera said under the PNC, 200 technical and vocational schools would be established in various communities in all districts.

Besides, the government would institutionalise a skills-based informal sector and encourage apprenticeship.

On tertiary education, he said, a GHc100-million Students Innovation Fund would be set up to promote competitive innovations in enterprise solutions among tertiary students.

He said the PNC would offer competitive low interest car loans to teachers in the public sector, offer duty free car importation to all professional teachers and educational workers and provide adequate and decent accommodation for teachers posted to the rural areas.

Regarding agriculture, Mr Apasera said a PNC government would come up with policies that would ensure the production of food in abundance and make it affordable.

He said it would also adopt the ‘operation feed yourself’ programme of the Acheampong era, repackage it and make it the flagship programme for solving the food security needs of the country.

When he took his turn, Dr Ayivor lamented the unemployment situation in the country and said that would be a thing of the past if the PNC formed the next government.

“Our educational and industrial policies will be the driving force for job creation in the formal and the informal sectors. The PNC, within two years, will create the opportunity for over three million jobs across varied sectors of the economy,” he said.

On energy and petroleum, he said oil produced in the country would be refined here.

Dr Ayivor said the cost of power would be brought down.

The National Chairman of the PNC, Mr Moses Dani-Baah, urged Ghanaians to vote massively for the party because of the lofty programmes it had in place to transform the country .

A leading member of the PNC, Dr Somtim Tobiga, who chaired the function, asked all members to forget about what had happened in the past and rally behind the party for victory.