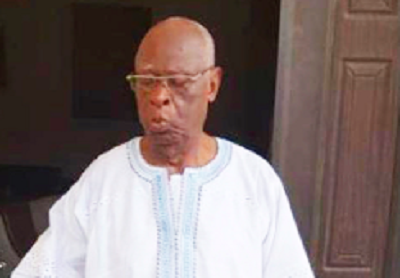 The chairman of the Council of Elders of the People’s National Convention (PNC), Colonel (retd) Luri Bayorbor, has called on feuding factions in the party to stop the media war and “take it cool.”

“It is a party problem. Let us come together as a family and resolve whatever differences we have on the table,” he said.

Speaking in an interview with the Daily Graphic yesterday, Col. Bayorbor said there were due processes to be followed in the party and if one felt unjustifiably treated or had a problem with the leadership, the Council of Elders existed to play a mediating role to resolve any problem within the party.

The leadership of the PNC and the General Secretary of the party, Ms Janet Nabla, have been embroiled in fierce disagreement following an announcement by the party last Saturday that Ms Nabla had been suspended for "gross misconduct, incompetence, and insubordination."

The party said the decision was taken after an emergency National Executive Committee (NEC) meeting held at the GNAT Hall on Saturday, August 28, 2021.

But in a counter, three members of the party petitioned the National Executive Committee (NEC) of the party to impeach the party’s leader, Mr David Apasera, and the chairman of the party, Mr Moses Dani Baah, for alleged financial malfeasance and misconduct.

Speaking to the issues, Col. Bayorbor said the issuance of threats in the media would not resolve any problem, adding that, “if you are suspended, follow the procedures to have it reverse but not to be issuing threats.”

“We need people to join us and not for the members to leave the party. There is too much noise in the media space and it is not good enough,” he stated.
Col. Bayorbor said he was very much disappointed at the developments in the party.

He said the Council of Elders would take up the issue next week to resolve whatever challenges the party was facing as of now.

Mr Apasera told the Daily Graphic that it was only the Disciplinary Committee that received and investigated petitions or complaints against any member of the party.

He said it was only after its investigations that the committee’s report, together with its recommendations, were sent to the NEC for a final decision to be taken.

“The petitioners must go back and look at the party’s constitution to follow due process,” he stated.