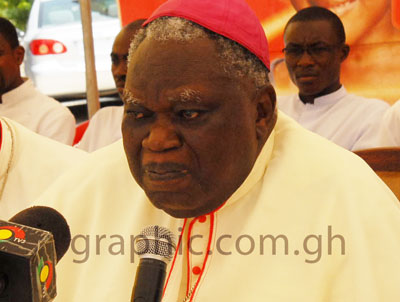 The Metropolitan Archbishop Emeritus of the Catholic Archdiocese of Kumasi, Most Rev. Dr. Peter Akwasi Sarpong, has taken a swipe at party politics, describing it as the cause of the country’s stagnation in terms of its political, economic and social circumstances.

He said for instance that if a political party succeeded another one, “you cannot expect the party in power to complete projects began by the outgone party. And if even the projects are finished by the former, the latter will take credit and at the same time accuse the ruling party of deceiving the electorate.”

Speaking at the 2020 Founder's Week celebration of the Ghana Academy of Arts and Sciences last Friday via zoom, the Archbishop Emeritus noted that it was only natural that the winning party replaced the top hierarchy of the security services, top civil servants and ambassadors with new ones “who are ideologically aligned and dependable.”

Most Rev. Dr. Sarpong was speaking on the topic: “Building a lasting democratic culture through the exercise of political and religious tolerance.”

He stated that the moment there was an election and one party won, “the winner takes all” policy kicked in automatically.

He said the tag of ‘witch-hunting’ was one major disadvantage in party politics, as the incoming political party that won an election could not take action on inherited cases of corruption, mismanagement, embezzlement without being labelled as such.

Most Rev. Dr. Sarpong expressed concern over infractions in party politics that had led to unfettered intolerance of opposing views in the country.

Quoting different scholars and writers to back his assertions, he said politics was more dangerous than war, “for in war, you are only killed once.”

Comparing political party activism to the chieftaincy institution, the renowned Catholic bishop said unlike politics, the death of a chief did not necessarily call for change of advisors.

He said he was disappointed that “religion fails to come to the rescue when party politics has failed to achieve unity and tolerance.”
"Religion rather entrenches itself in activities of non-adherence," he observed.

He said he was sad that while African traditional religion was more tolerant, the same could not be said about the Islamic and Christian religions.

Archbishop Sarpong compared the Islamic and Christian religions to that of political parties, explaining that their posture had the semblance of a political party manifesto.

"For instance, you cannot expect a Muslim to tolerate the Biblical teaching that the one God is a Trinity and that Jesus Christ is the son of God and the last prophet,” he said.

Proffering solutions to the current state, Most Rev. Dr. Sarpong said there was the need for a national manifesto that placed emphasis on education, health and agriculture and approved by Parliament for all political parties to implement when they came into power.

He further called for a legislation that would forbid political party candidates from engaging in campaigns of insult against their opponents, insisting that candidates needed to campaign on their strengthens and not on the weakness of their opponents.

Touching on the personality and role of the country’s first President, Osagyefo Dr. Kwame Nkrumah, Archbishop Sarpong described him as “one of Ghana’s greats.”

He said it was not surprising that the international media recently voted Dr. Nkrumah as Africa’s Man of the Millennium, a position he personally agreed with.

The President of the Academy, Justice Prof. Henrietta Mensa-Bonsu, who chaired the function, agreed with the main speaker on the extreme evils of partisanship, adding that the only challenge was how to get the best of the system in an era of a competitive form of government.