NDC vows not to recognise Akufo-Addo as President until... 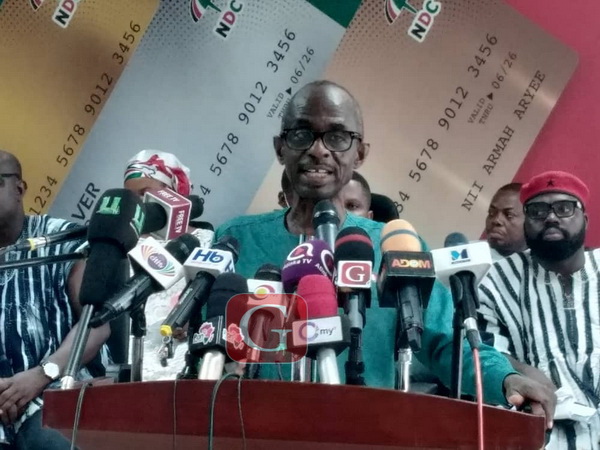 The opposition National Democratic Congress (NDC) says notwithstanding the inauguration of Nana Addo Dankwa Akufo-Addo as President of Ghana for a second term in office, the party will not recognise him as such until all issues surrounding his election are resolved.

The declaration was made known by the General Secretary of the NDC, Johnson Asiedu Nketia at a press briefing in Accra on Friday.

"Notwithstanding the swearing-in, the NDC shall not recognise Nana Addo Dankwa Akufo-Addo until all the issues surrounding his flawed election are satisfactorily resolved," Asiedu Nketiah said.

However, he maintained that NDC Members of Parliament would perform their parliamentary duties such as debating bills and vetting Ministers nominated by the President Akufo-Addo administration.

"Yes, we will participate in the vetting, the vetting is not meant to approve, it is also meant to block thieves from becoming Ministers," he stressed.

"Yes, we would debate bills and if they are wrong, we will shoot them down. We are not going to leave Parliament for Agyapa to come and be passed. When it is brought we will shoot it down.

"So, when we say we don't recognise Nana Akufo-Addo as President, we know what will hurt the national interest and what will further that same interest".

The leader of the opposition party John Dramani Mahama has filed a petition to the nation’s Supreme Court challenging the outcome of the December 7 presidential elections.

Mahama, the NDC candidate, got 47.4% of the vote and incumbent President Nana Akufo-Addo 51.6%. Mahama has described the result as “illegal” because the proper voter verification process wasn’t followed and is seeking the annulment of the declaration by the Electoral Commision.

The NDC is also calling for a Parliamentary inquiry into the chaos which greeted the process to elect the Speaker of the Eighth Parliament of the Fourth Republic on January 6-7, 2020.

"Particularly, the invasion of Parliament by gun-wielding military men with Azugu masks and the snatching of ballot box by now dishonourable Carlos Ahenkorah and to punish all those who are found culpable in accordance with the laws of the country. Including the conduct of the Clerk of Parliament and to forestall any such occurrence in the future. How the Marshal of Parliament, allowed the security of Parliament to be breached by people described in Parliamentary parlance as foreigners".

According to him, the actions of the New Patriotic Party MPs provided Ghanaians with a "repeated snapshot of what took place across the length and breadth of the country during the December 7, General Election".

He said their unlawful actions had left him confident that the 2020 election petition filed by its Presidential candidate, John Dramani Mahama will be successful.

"Ladies and Gentlemen, the sad spectacle we witnessed in Parliament were just a repeated snapshot of what took place across the length and breadth of the country during the general election held on 7th December, 2020. The use of armed soldiers at various polling stations and constituency collation centres, snatching of ballot boxes, intimation, harassment and in some cases, killing of innocent unarmed civilians was what characterized the elections of 7th December 2020. The circumvention of due process as we have witnessed in the election of a Speaker of Parliament was played out in the form of plain thievery and systematic rigging, culminating in the flawed and fraudulent declaration of 2020 Presidential election which the NDC is challenging at the Supreme Court.

"As the world witnessed the ugly events in the Speakership election, and the subsequent vindication of truth, we are quite confident that it is only a matter of time before truth once again prevails in the matter of the 2020 election petition filed by our Presidential Candidate in the 2020 Presidential Elections, H.E John Dramani Mahama.

"It is our hope that when the outstanding issues regarding the disputed parliamentary results such as Techiman south, Sefwi Wiawso, Hohoe, Tarkwa Nsuaem, Zabzugu, etc. are satisfactorily resolved there will be a clear NDC majority in the 8th Parliament of the 4th Republic".