NDC asks CJ to step aside for probe into bribery allegation 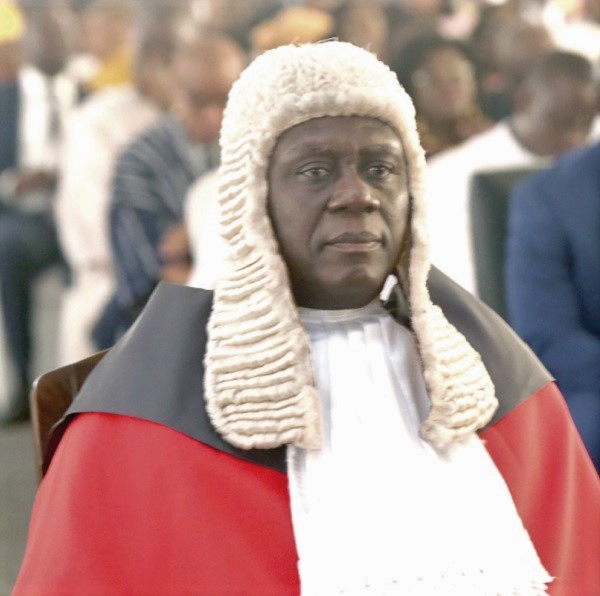 The opposition National Democratic Congress (NDC) wants the Chief Justice, Justice Kwasi Annin Yeboah to step aside from office temporarily to allow for fair investigations into a $5 million bribery allegation against him.

According to the party's General Secretary, Johnson Asideu Nketiah, since the Chief Justice is at the centre of the bribery allegation and also has the power to discipline any person under the Judicial Service, the institution that has the structures to investigate the issue, it would be appropriate as good governance dictates, for the Chief Justice to step aside in order to allow the Judicial Service to investigate the matter.

But speaking at a press conference at the party's head office in Accra on Tuesday, July 13, 2021, the NDC's chief scribe noted that the nature of the bribery allegation needs to be handled with all seriousness in order not to erode the public confidence in the country's judiciary.

For him, the Chief Justice cannot be in office whilst he is investigated by staff of the Judicial Service he (Chief Justice) supervises.

Mr Asideu Nketiah was of the view that apart from the Judiciary Service that could handle the case, the matter could also be investigated through the setting up of a public-enquiry by the president.

"We think that due to the considerable public interest involved in this matter, another effective and transparent approach in the circumstance would be a full-blown public inquiry," he noted, adding "This can be done by invoking Article 278 of the 1992 Constitution under which Parliament can by a resolution compel the President to set up a Commission of Inquiry to look into the matters at hand in a transparent manner and make a faithful determination thereof."

For him, the bribery allegations against the Chief Justice "has dire consequences for the reputation of not just the Judiciary but our revered Chieftaincy institution and the country as a whole."

Mr Asideu Nketiah added, "And we hold the opinion that the transparent approach of a public enquiry is the best way to go. This approach we believe is in the interest of the Chief Justice who stands accused and his accuser."

He also pointed out that the Commission on Human Rights and Administrative Justice (CHRAJ) could equally investigate the matter.

For him, CHRAJ had better capacity to investigate the case than the Criminal Investigation Department (CID) of the Ghana Police Service, which Justice Annin-Yeboah had referred the case to.

According to Mr Asideu Nketiah, "We are of the considered view that the recent history of the Police CID with respect to investigations into allegations against high-ranking officials of the Akufo-Addo/Bawumia government would not afford the sort of confidence that must be engendered in an investigation such as this considering the elevated position of the person against whom these allegations have been made."

He was of the view that without taking sides or commenting on the merit or otherwise of the said allegations of bribery against the Chief Justice, it believed that an investigation by the Police CID would be woefully inadequate to assure the Ghanaian public that a thorough inquiry had been conducted into the matter.

"We recall how corruption cases like the Australia Visa fraud scandal, the Galamsey fraud scandal, the 500 missing excavators scandal, just to mention a few ended in clear cover-ups when handled by the Police CID," he stated, adding that "the magnitude and gravity of this matter calls for utmost transparency and confidence building which the CID cannot muster at the moment."

For him, CHRAJ has an enviable reputation of looking into similar cases of alleged corruption against highly placed state and government officials would be better placed to conduct such a serious inquiry than the police CID.

The NDC'S General Secretary also said the party disagrees with the referral of the matter to the General Legal Council’s Disciplinary Committee by the Chief Justice, for the sole reason that it is an offshoot of a body chaired by the person at the center of these allegations, the Chief Justice.

Mr Asideu Nketiah added, "The likelihood for an impartial and balanced investigation by them into this matter would be quite minimal so long as the Chief Justice remains at post," pointing out that "We therefore believe that the GLC should stay its hands over this matter pending the final determination of the issue by independent state organizations cloaked with requisite authority to do so."