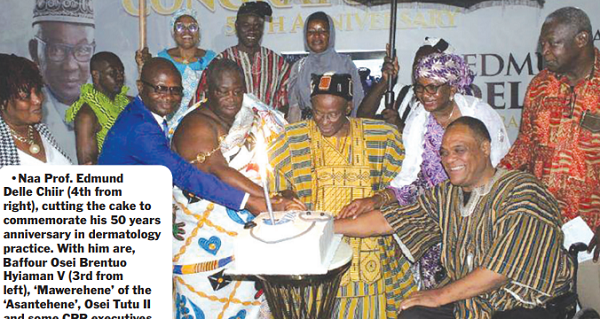 Naa Prof. Edmund Delle Chiir (4th from right), cutting the cake to commemorate his 50 years anniversary in dermatology practice. With him are, Baffour Osei Brentuo Hyiaman V (3rd from left), ‘Mawerehene’ of the ‘Asantehene’, Osei Tutu II and some CPP executives Follow @Graphicgh

Friends, colleagues, family and loved ones as well as people whose lives have greatly been impacted by the founder and owner of Rabito Clinic, Naa Professor Edmund Nminyem Delle Chiir VIII, came together last Wednesday to celebrate him as he marked his 50 years as specialist dermatologist.

The dedicated service he has rendered over the past 50 years was celebrated in equal measure. The event which took place at the Rabito Clinic in Osu brought together traditional rulers, government officials, political figures, and other renowned health practitioners.

They all spoke highly of his sober, affable, and hardworking nature of the astute entrepreneur, investor, philanthropist, lecturer and the statesman. Naa Prof. Delle Chiir, who is also currently the Paramount of Nandom, was appreciated for the pivotal role he had played in their professional careers of others.

Naa Prof. Delle Chiir was born on November 18, 1943, in Nandom in the Upper West Region of Ghana. He started his educational foundation in Nandom and later received a full scholarship to study at the University of Padua in Italy, where he obtained his Doctor of Medicine and Surgery in 1970.

He was appointed a Resident Medical Officer and lecturer in Skin Diseases at the University of Padua from 1972 to 1974.

Upon his return to Ghana after acquiring academic and professional experience, he started the Rabito Clinic in Ghana in 1974 in fulfilment of his childhood dream to invest in Africa and serve his people. Naa Prof. Delle Chiir named the clinic after his academic and career mentor Prof Caologero Rabito formerly of the University of Padua, Italy.

The Minister of Local Government, Decentralisation and Rural Development described him as a very good person who had great passion and always ready to serve human kind.

He recounting that he fi rst met him at the Laterbiokoshie branch of the Rabito Clinic and since then, the bond between them continued to grow stronger.

“I became General Secretary of the New Patriotic Party in 1998 and Prof became the Chairman of CPP sometime back, we have very interesting arguments and discussions “I was very lucky to have elderly people in my political life but I can say that he is somebody who will call and check on you and your family almost every time,” Mr Botwe said.

Dr Chambas also expressed how proud he was over the achievements, accomplishments and the exemplary life Naa Prof. Delle Chiir had lived in the service of mankind.

“I used to wonder if he was running the hospital profi tably because there are so many who come here and after treating you, he just say see you later without charging a pesewa and I, in particular, can testify to that,” he said.

Naa Prof. Delle Chiir appreciated everyone present for the love they had showed him and also for believing in him. He also thanked God for all the lessons be had learnt throughout his journey.

While recounted the gall and glory moments he had in his career as a dermatologist, Naa Prof. Delle Chiir said God had given everyone a gift and it’s upto each person to look for that gift and move with it. “I also learnt from a lecturer who said something and that has guided me all my life.

He said place God first above all things, place purity, integrity and hard work above bluffi ng and popularity and there’s nothing that you will do and not succeed.

This is what I have followed throughout my life,” he said. He further urged all people with black skin colour to love and protect it and also refrain from using toxic creams which might end up destroying it.