My appointment is big challenge —Adusei 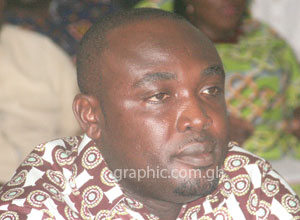 The Deputy Ashanti Regional Minister, Mr Samuel Yaw Adusei, has described his appointment as a big challenge and a vote of confidence by President John Dramani Mahama.

The 39-year-old Mr Adusei, a product of the Kwame Nkrumah University of Science and Technology (KNUST) and the President of the Biochemist Students Association of the University for 1998 1999, told the Daily Graphic that he was determined  to collaborate with the substantive minister to initiate policies and programmes that would leave a mark in the region during their term in office.

“I am going to bring leadership to the doorstep of the ordinary Ghanaian, irrespective of party affiliations, status, ethnic background, religion and gender, and I am certain to leave a legacy that would make President Mahama very proud of appointing me as a Deputy

On what he intended doing to win the heart of people in his constituency in particular and the country in general, Mr Adusei said initiating policies that would make the region very attractive to investors with the view to creating job opportunities for the massive unemployed youth remained one of his top priorities.

“The challenges of unemployment are part of our priorities.

An enabling environment would be created to woo investors to the region in their numbers and with this there would be job opportunities for the youth to enable them  to lead responsible lifestyles,” he added.

According to Mr Adusei, security in the region was another challenge he was  determined to address, explaining that since the spate of robbery was  creating security challenges and undermining the quest of creating a serene atmosphere for law abiding citizens to fully focus on the economic ventures, he would collaborate with the security apparatus to nip robbery in the bud.

“I want to be remembered as part of the team that addressed the menace of robbery in the region and created a serene atmosphere that enabled my constituents to focus on  their lawful businesses,” he further assured.

His leadership qualities was unearthed at KNUST, especially when he became the President of the Bio-Chemist Students Association of the university at a time the coffers of the association was in red.

“I gave the Biochemist Association of the KNUST a positive outlook because at the time I left office, our activities had been firmly rooted on campus, a situation that made the current Vice Chancellor, Professor  William Otoo-Ellis, very proud of me,” he noted.

If the Biochemist Association of the KNUST baptised him as a leader, the Katanga Hall where he was accommodated completely moulded him as a shrewd politician.

“The political dynamism at Katanga 0 Hall helped me a lot because with the activities in the hall I became more active in politics on campus, supported the operations of the Tertiary Education Institution Network of the National Democratic Congress (NDC) and met a lot of NDC stalwarts.

Mr Adusei who is currently pursuing an MBA programme at the KNUST was more involved in the constituency programmes of the NDC at Bantama after graduation, especially after his national service at Aniwah Medical Centre at Emena, near Kumasi.

Having been in the shadows of political stalwarts in the constituency for sometime, Mr Adusei decided to be at the forefront in 2008 by contesting the constituency primaries, but lost to Nana Akoto Osei.

One of the landmarks of Mr Adusei’s involvement in the party was the quelling of the foot-soldiers uprising of the NDC after the party won the 2008 elections.

His first appointment after the 2008 elections was at the Bantama Sub Metro where he was made a member of the Welfare Service at the Sub Metro, after which he was offered appointment as the Ashanti Regional Coordinator to the ECOTECT Company limited, a company that plants assorted trees in the region as part of the forestation programme of the government.

When nominations were opened for the party to select a parliamentary candidate at the Bantama Constituency, he contested for the second time, but unlike the 2008 primaries where he had stiff opposition, this time he stood unopposed and was, therefore, given the nod by the party hierarchy.

Notwithstanding the challenge, he started giving the party a new outlook at Bantama by flooding the constituency with party colours.

“I hung party flags at vantage points as part of my campaign at Bantama, erected massive signboards, billboards and posted various posters at every part of the constituency. I also provided assorted T- Shirts of the NDC to party followers, a situation that gave the party a complete new outlook," he told the Daily Graphic.

He obtained as many as 9,314 votes for President John Dramani Mahama as against about 7,000 votes the party obtained in the 2008 elections.

“The opposition NPP was shocked that  I managed to obtain over 9,000 votes at Bantama. It was an indication that I worked very hard and with my appointment I will continue to work very hard for the party,” he assured.

“As I was settling down to the news received, the announcement came on air that  President Mahama had appointed me to this high office, so I thank the President for the honour.”

“My role is to support the regional minister to execute programmes that would make our party achieve our Better Ghana Agenda and I am ever ready for it. Our main target will be creating employment opportunities for the youth and soon something positive would be realised.”

“The road network in the region is also not the best, but measures would be put in place to make roads more convenient for travelling,” he assured.

On health, he said facilities would be improved and equipment installed to put the region on course as far as quality health care  was concerned.

“Sanitation would be another area we are likely to focus  on to enable the citizenry  to lead healthy lifestyles,” he assured, adding that “our success for the future depends on what we do today, so we are going to work very hard to leave a legacy as part of the team that brought palpable achievements to the Ashanti Region.”