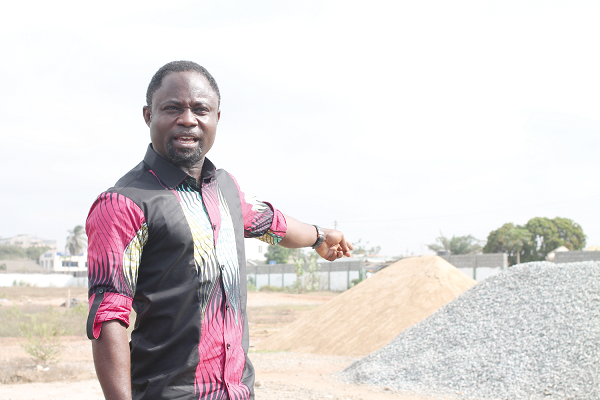 Mr Kwabena Mintah Akandoh, Ranking Member on Health and MP for Juaboso in the Western Region, making some remarks about the heaps of sand and gravels on the La General Hospital construction site. Picture: Maxwell Ocloo Follow @Graphicgh

The Ranking Member on the Health Committee of Parliament, Mr Kwabena Mintah Akandoh, has appealed to the government to ensure the reconstruction of the La General Hospital in the La Dade-Kotopon Municipality to cater for the health needs of the people of La and its environs.

The hospital, which was in a deplorable condition and was pulled down in March 2020 to make way for a new one, is yet to take off two years down the line.

Mr Akandoh, who is also the National Democratic Congress (NDC) Member of Parliament (MP) for Juaboso in the Western North Region, was speaking to journalists after he, in the company of the NDC MP for La Dade-Kotopon, Ms Rita Naa Odoley Sowah, visited the site where the old hospital was demolished for a new one to be constructed.

As of the time of the visit some construction workers were seen on site with the compound weedy with some trips of stone and sand at the site but the real construction work was yet to take off.

Mr Akandoh told journalists that a loan of €68 million was approved by Parliament for the project hence the problem could not be with funding.

He explained that if there was a problem with the funding that was approved by Parliament, the government could come with a new agreement for it to be approved for the reconstruction of the hospital.

He explained that once the sod had been cut it meant that the contractor was ready to commence the redevelopment of the project and therefore wondered why the project had not taken off two years after the sod was cut.

He thanked the residents of La who were going to be the direct beneficiaries of the project for exercising restraint all this while and waiting patiently for the project to take off and be completed for them to use.

He, therefore, called on the President to step in to ensure the project takes off as the patience of the people of La for the project has been tested for long and they needed to see the project.

The MP for La Dade-Kotopon, Ms Sowah, for her part, said the old La General Hospital that was pulled down was not totally in a bad state as the people were made to believe.

"I am therefore calling on the President to respond quickly to the call of the people of La and ensure that the project comes off as promised as any further delay in the execution of the project would compromise the health of the people," she stated.

Some residents who were clad in red and black dresses with red hand bands, also expressed their frustrations over the delay of the project and also added their voice to that of the Ranking Member and their MP for the intervention of the President to ensure the reconstruction of the hospital.

According to some of the residents who spoke to the Daily Graphic, the hospital was a referral facility, which was providing health care to the people of the area and its environs until it was pulled down two years ago.

A resident of La, Mr Ransford Nii Odoi Yemo, told the Daily Graphic that apart from the old block that was not entirely in a bad state, there were other new facilities attached to the old block providing health care for the people.

"We had a mortuary at the old facility that was pulled down but now we have to carry the bodies of our relatives far away for preservation," he stated.