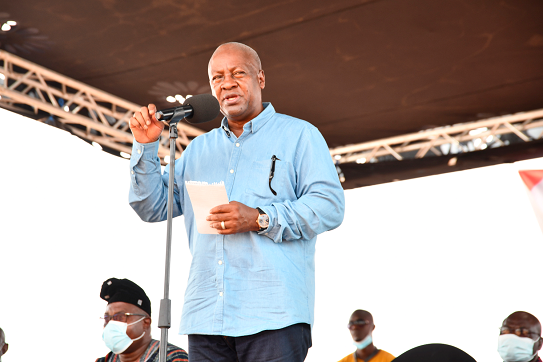 Former President John Dramani Mahama has called on members of the National Democratic Congress (NDC) to uphold the principles of probity and accountability in all facets of their lives to help preserve the legacy of the 31st December Revolution.

At the 39th anniversary celebration of the revolution in Accra last Thursday, the former President said although the events of December 31, 1981 were not perfect, it bequeathed on Ghanaians principles that must be upheld for national progression.

“My comrades and friends, the revolution was not perfect as we know every human activity is not perfect. Like every human being, our founder, the leader of the revolution, Chairman Rawlings, was not perfect but the sum of what he did on earth, especially from age 33 when he burst onto the political scene in Ghana, and the sum events of the 31st December Revolution represent a kind of atonement for the ills of the past,” he said.

The event, which was held for the first time without the presence of the late founder of the NDC and leader of the movement, was on the theme, “Sustaining the Gains of the 31st December Revolution: The Legacy of former President Rawlings”.

It brought together stalwarts of the party, including the National Chairman of the NDC, Mr Samuel Ofosu Ampofo, former Minister of Trade and Industry, Mr Dan Abodakpi, former Defence Minister, Dr Benjamin Kumbuor, and Member of Parliament-elect for Krowor, Madam Agnes Momo Lartey, who made separate statements to commemorate the day.

Others present were the NDC running mate for the 2020 elections, Professor Naana Jane Opoku-Agyemang, and former Speaker of Parliament, Mr Edward Doe Adjaho.

Mr Mahama said as a party born out of the events of the 31st December Revolution, the NDC had a responsibility to uphold the principles of probity and accountability, as a part of their national life and daily practice.

‘’The revolution bequeathed to us the principle of holding account the people entrusted with public responsibility since sovereignty belongs to the people,” he said.

Mr Mahama said the involvement of ordinary Ghanaians such as butchers, dressmakers, the mechanics, teachers, farmers and fishermen in drafting the 1992 Constitution had made the constitution the most enduring in the history of the country.

Paying glowing tributes to the memory of the NDC founder, Mr Mahama said: “I believe that the only vehicle; that is the best vehicle that can ensure that he is remembered in the hearts of men, is the vehicle of the political party he founded and that is the NDC. This is the reason why we must commit ourselves to the cause of party NDC.”

He said the NDC must remain united to fulfil the reasons for which it was created and help develop the country.

“I know like every human institution, we might have our disagreement but let’s have and put as a focus for all of us that protecting the revolutionary origins of our party and the legacy of our founder is the main objective that we all want to achieve.

For his part, Mr Ofosu-Ampofo said the NDC would challenge the outcome of the election through legitimate means and not resort to the burning of markets.